Wildebeest (on the right), Africa – lions eat them! – photo by Martin_Heigan

In answer to the question, “what do lions eat“, the answer comes with an appreciation of this wild cat’s hunting prowess. Over centuries people have considered the lion at the very top in respect of hunting skills. The lionesses are the hunters of the pride. They hunt in groups as most of us have seen on television.

Their exceptional hunting skills allow them to hunt and kill other predators and large animals (mammals) usually within the range of 190–550 kg (420–1210 lb) but occasionally outside this range. The choice of prey is based on availability. The region can dictate the type of prey. For instance, in India it might be livestock or the Savuti river, where they prey on elephants. The risk of injury is the limiting factor in choosing prey. This translates to avoiding animals such as adult rhinoceroses, adult male buffalo or adult male giraffes. Competitors such as leopards cheetahs, hyenas, and wild dogs may be killed but not usually eaten. Smaller gazelles, impala, and other agile antelopes are generally excluded. Perhaps on a basis of effort versus reward, these smaller antelope are fast, very fast animals more suited to the prey of the cheetah (see what do cheetahs eat).

Note: until about 10,000 years ago the lion was the most widespread land mammal apart from people. The lion is now considered threatened (vulnerable). See IUCN in relation to cats.

What follows is an illustrated list of the mammals that fall into the group of animals eaten by lions and provides the answer to the question, “what do lions eat?”. The listed animals’ habitat is in Africa unless otherwise stated.

They inhabit plains and open woodlands in places such as the Serengeti Park, Africa. 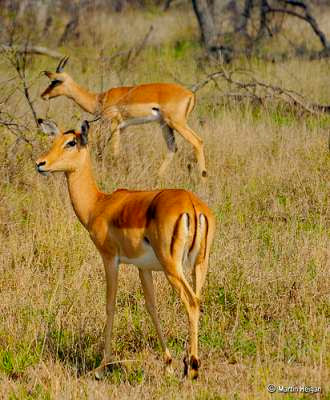 Impala – photo photo by Martin_HeiganThe impala is also the prey of the cheetah (see what do cheetahs eat). The impala is an antelope of medium size. The average weight is 75 kilograms. When frightened (
for example by a lion!), as a group, they jump around to confuse the predator. They are extremely athletic being able to jump 9 meters (30 ft) in length and 2.5 meters (8 ft) high.
Zebras

What do lions eat? = Zebra – photo by digitalART2

The zebra is very well known to people. They are, unsurprisingly, part of the horse family. There are 3 types: the Plains Zebra (most common), Grevy’s Zebra and the Mountain Zebra.  As is the case for horses they walk, trot, canter and gallop. Attempts at domestication have generally failed. They are slower than horses but have more stamina. They are about 2.3 m (8ft) long, 1.25-1.5 m (4-5ft) at the shoulder. Their weight is around 300 kg (660 lbs)

Lions rather lazily chasing a buffalo and not doing well  – photo by abrin523The buffalo is well known to be a dangerous animal, one of the most dangerous in Africa. This is a large animal, 1.7 meters high, 3.4 meters long and weighing 500-900 kg (and essentially too dangerous, as an adult, for the lion to hunt – but see group hunt in video below). This animal is a large African bovid (cloven-hoofed mammals of the Bovidae family). Warthog

What do lions eat? = Warthog – photo by tattoodjj

The warthog is a wild member of the pig family, in Africa. It has wart-like protrusions on the head, hence the name. They are solid creatures: 0.91 to 1.5 meters (3–5 feet) in length and 50 to 150 kg (110–330 pounds) in weight. They are fast, good jumpers and have a keen sense of smell. They evade predators by running.

Nilgai – Indian antelope – photo by nishith ajitsariaThe Nilgai is a very large member of the antelope family. It’s habitat is in India and Pakistan. It is the largest antelope of Asia. It is probably the second or third largest antelope in the world. It is, perhaps, worth remarking that the lion in India is very scarce; see the map:

What do lions eat? = Wild boar – published under a Wikimedia license – author: Richard Bartz, Munich Makro Freak.
The wild boar is the wild ancestor of the domestic pig. Their weight averages between 70–90 kg kilograms (144–200 pounds) but is dependent on where the animal is found and can be much heavier. In addition to India this animal is native to:
Giraffes

What do lions eat? = Kudu – South Africa – photo by TurkinatorThere are two species of antelope:

Kudu numbers are also threatened by people hunting them for their meat. People also hunt them for hides and horns and they use their habitats for charcoal burning and farming.

The Hartebeest is an antelope that weighs between 120-200 kg (265-440 lb). The animals’s habitat is found in West Africa, East Africa and Southern Africa.

Gemsbok – photo by ucumari – ucumari is a noted photographer on Flickr.

The eland is also an antelope whose habitat is the African savannah. There are two species, the common eland and the giant eland. They are the largest African antelopes weighing in at 600kg – 800kg (1300 – 1760 lb) for the males.

From What Do Lions Eat to Wild cat species

Photographs are published under a creative commons license: