The question, “what does tabby mean?” is asked on the Internet. I’m sure that when people are asking the question they are referring to the coat of a domestic cat. This is because the word “tabby” is most commonly heard in the English language in reference to a tabby cat. 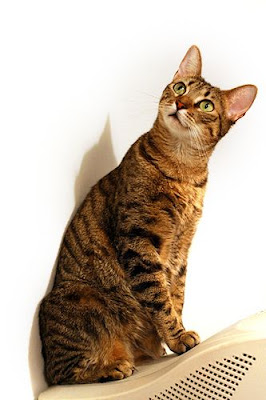 It is believed that the word “tabby” originates in the appearance of silk sold in Baghdad, Iraq. There is a region near Baghdad called “Attabiyah” or “Hayy at Tarbiyah” or simply “Tarbiyah”, I am not sure. I presume that the region was known for selling silks that had a striped appearance (watered, wavy silk). Side note: there is a Tarbiyah Academy in the USA near Baltimore.

You can perhaps detect the word “tabby” hidden in the name as “tarbi” or “tabi”. The word “tabby”, as you know, is pronounced “tabi”. If someone can clarify or be precise in a comment it would be most welcome.

“Attabiyah” appears to been created from the Latin “attabi” and later the French word “tabis” which mean watered silk as far as I am aware.

The look of watered silk is somewhat like the look of a marbles (or marble) tabby cat and thus the word tabby was used to describe such a coat.

There are three kinds of tabby coat: spotted, classic or marbled and striped or mackerel.

I hope that this explains what the word “tabby” means.

The cat illustrated page is a mackerel tabby and the photo was taken by a Brazilian lady whose Flickr username is fofurasfelinas.