The cat in Alien was Jonesy. Ripley escaped the Nostromo with Jonesy. She put herself and Jonesy into cryo-sleep where they remained for 57 years. A salvage crew picked them up thinking initially that together they were an alien life form because they read Ripley and Jonesy as one set of DNA and therefore one organism. 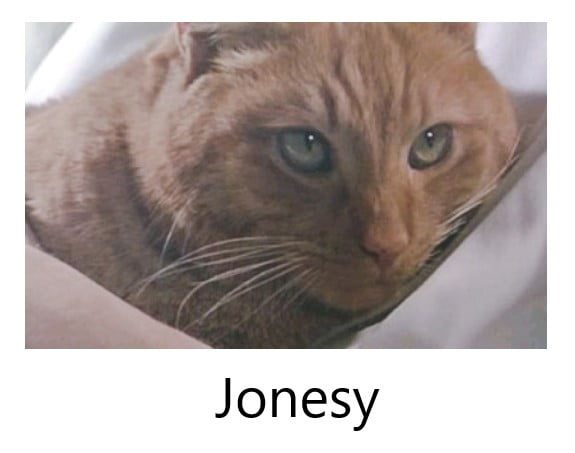 Jonesy. Picture: PoC from an image in the public domain.

After the rescue they were reunited in the hospital of Gateway Station by Carter Burke. We see Ripley and Jonesy together in her new apartment but Ripley has to return to LV-426. She has to leave Jonesy behind. She said, “And you, you little shit-head, you’re staying here”. That, as I remember it, is the last time we see Jonesy after Ripley’s assignment to USS Sulaco. Ripley died on Fiorina 161.

Although I have seen the film several times I have relied upon the assistance of the alien anthology fandom website to remind myself what happened to the cat in Alien. Jonesy is also spelled: Jonesie.

Jonesy is a ginger tabby. He is a male domestic cat. Although I’ve never lived with a ginger tabby cat, they are often thought of as being one of the best sorts of domestic cat if you believe that a cat’s coat affects a cat’s character. There is anecdotal evidence to suggest that it does and ginger a.k.a. red tabby cats are known to have good, solid characters with leadership qualities!

I would expect Jonesy to have lived his life out very comfortably both in the film and in real life. We don’t know who Jonesy lived with in real life but it’s almost certain to have been a very good cat caregiver. Often filmakers use cats belonging to crew members or someone a crew member knows. I don’t know who owned Jonsey in real life. Ginger tabbies are good for film work as they have good, affable characters.

P.S. There’s a book about him which you can still buy on Amazon: Jonesy: Nine Lives on the Nostromo.