↓
Home→Human to cat relationship→What is the difference between a wild cat and a feral cat?

The difference between a wild cat and a feral cat is found in their origin and their history both individually and collectively. Taxonomically they are classified differently by the scientists based on their DNA. Feral cats are classified under domestic cats. Domestic cats are one species of cat.

“Wild cat” is a phrase which describes an individual cat who is a member of a wild cat species of which there are 36 or 37 depending on how you classify them. They are entirely wild creatures and always have been. They have never been domesticated except on rare occasions when someone, somewhere tries to make a pet out of a wild cat species such as the bobcat. Wild cats live in the wild, in their chosen habitat. Cheetahs prefer the open Savanna, while tigers prefer a range of landscapes but it is often more wooded. Snow leopards live on the high plains of Mongolia and the lower slopes of the Himalayas. These are wide open and vast spaces deserted of people where they are safe. Genuine wild cats are undomesticated and unsocialised. Some are more friendly towards people than others e.g. cheetahs, caracals and margays. I stress that a wild cat will be classified as one of 36 species by scientists.

A confusion is encountered in the classification of the wild cat species because one of the species is called “wildcat”. Notice the two words are joined together. But the wildcat as one of the 36 species is still a wild cat.

All feral cats originate in domestic cats although many are born in the wild and act very much like genuine wild cats. Feral cats are classified scientifically under the domestic cat. That may surprise people. But it emphasises the point I am making that they are the same as domestic cats in terms of their anatomy and DNA – their phenotype and genotype.

The Australian feral cat is probably the most wild of all feral cats because they live in the outback and hunt exclusively like wild cats whereas many feral cats in other countries live in the urban environment and are fed by kind people who volunteer for TNR programs. Or they scavenge for scraps behind restaurants or hospitals. It is a grim life devoid of dignity when compared to the proud wild cats such as the mountain lion roaming the remaining but shrinking spaces of California where they are fortunately protected.

The difference can be subtle

The difference between a feral cat and wild cat can be very subtle in terms of their appearance and behaviour. You could almost reclassify the Australian feral cat a new species of wild cat as they have evolved over many decades. But at their core, the scientists classify feral cats as not being wild cats. They are just wild, unsocialised domestic cats at heart.

You can domesticate hardened feral cats but it can take months and months of patience depending on the individual. If you catch a young feral cat early enough you can socialise and domestic them and turn them into a genuine domestic cat. You can more or less domesticate an adult wild cat but let’s say you can tame them but not truly domestic them. Hand reared wild cat species can become quite good pets depending on the species. It is when they imprint on the human and forget their wild nature that it works the best. 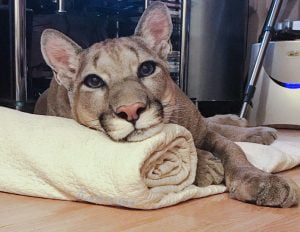 The puma is a big little cat

Despite the puma being a physically large cat and the fact that their size is frequently overestimated, they are not ...
Read More

How many types (species) of caracal are there?

Wikipedia has got this wrong. At present, there is only one known species or type of caracal with the scientific ...
Read More

I am picking up on a study that I have written about before which genetically analysed the Chinese mountain cat ...
Read More