↓
Home→Wild Cat Species→Puma→What is the largest mountain lion on record?

There will be a dispute about this but I believe that I have a definitive record for the largest or heaviest (should be the same) mountain lion on record because it was certified by the U.S. Biological Survey. The cat was an Arizona puma killed in 1917 by a predator hunter i.e. a sport hunting human.

It must have pleased him to have killed such a magnificent creature. Without intestines (removed for some reason perhaps to preserve the body) the cat weighed 125 kilograms. This is 276 pounds. If you add back the intestines which at a guess would have weighed several pounds you could argue that this cat weighed in the region of 280 pounds.

The source of this information is:

This is considerably more that the reported number referred to by Wikipedia: 1901 – 232 pounds. They say the 276 pound weight is unreliable and might have been exaggerated.

I disagree because it was certified. An exaggerated record might be the 170 kilogram weight of a puma killed in 1958 in the Chaco region of Paraguay reported in Sports Afield Hunting Annual. This is 375 pounds.

The weights of pumas vary hugely over their large geographic range across north, central and south America. You’d be surprised to read that pumas in equatorial forests in Peru weigh between 28 and 30 kilograms (62-66 pounds). This is not much larger than a medum-sized wild cat.

There is also a wide divergance in weight between males and females. Males weigh 40-60 percent more than females and are larger in all body measurements. It is believed that the difference is due to sexual selection. I take this to mean that females select large males with whom to mate.

SOME ON WILD CAT SPECIES BY SIZE:

The record adult male bobcat weighed 26.8 kilograms which is 59.1 pounds. The source for this information is The bobcat ...
Read More

Is this the biggest Siberian tiger in the world? He/she is captive and tame at least with this man. I ...
Read More 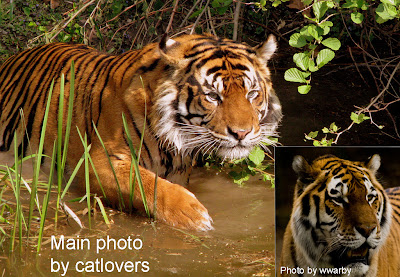