I am sure that I’m going to give cat haters and ornithologists ammunition to criticise me and domestic cats. But I have an answer to that. My cat, Gabriel, is the only cat that I have shared my life with who has attacked and killed birds. My previous cats were not particularly interested in hunting. Indeed, they were not particularly good at it either. But Gabriel, who was born a feral cat and who lived as one for the first seven weeks of his life, is a dedicated hunter. He acts like one and behaves like one. He will hunt until he drops given the opportunity. The bird in the video looks like a blackbird.

I don’t think that hunting by domestic cats is as prevalent as ornithologists make out. I know that on the Internet there are very many statistics about domestic cat hunting but they are estimates and I doubt the numbers.

Thankfully Washington DC are carrying out an extensive survey on the number of feral cats in their jurisdiction which will allow them to ascertain more accurately the impact that they have on the environment and on the lives of residents.

We need accurate information before being overly critical. On this occasion my cat brought a bird in either last night while I slept (which would be difficult or perhaps impossible, I don’t know) or he brought the bird in while I was at the gymnasium.

There it was under the bed. My first sign that he had killed a bird was when I noticed a single feather floating around the kitchen. At that time I had no knowledge of the bird kill. However, he kept going under the bed and on the last occasion I heard a crunching noise. I’ve heard that noise before. It’s when he crunches down on the head of a mouse and the bones shatter.

No doubt he was nibbling this bird and I picked up the sound of it. The video shows you what I found. It is a shortened version in order to make it upload more easily. 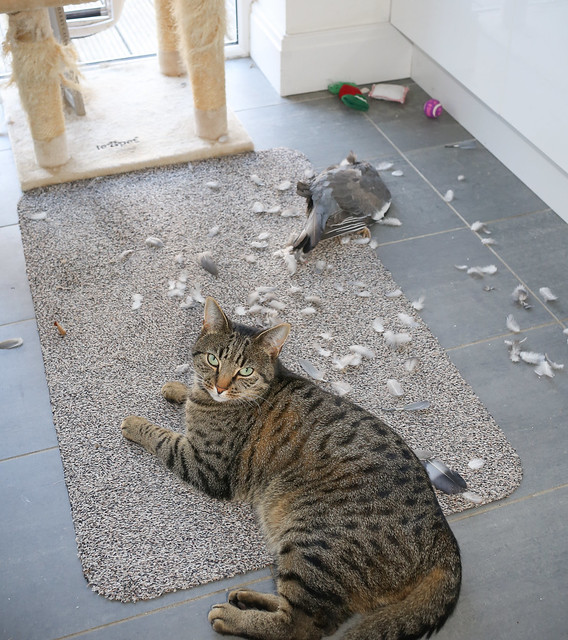 He kills quite a few birds. The biggest was a parakeet. He’s killed three pigeons recently. They are exposed to being hunted because they spend quite a lot of time on their feet, on the ground looking for morsels of food that might have fallen from a bird feeder or perhaps insects. This lays them wide open to being hunted by my cat. 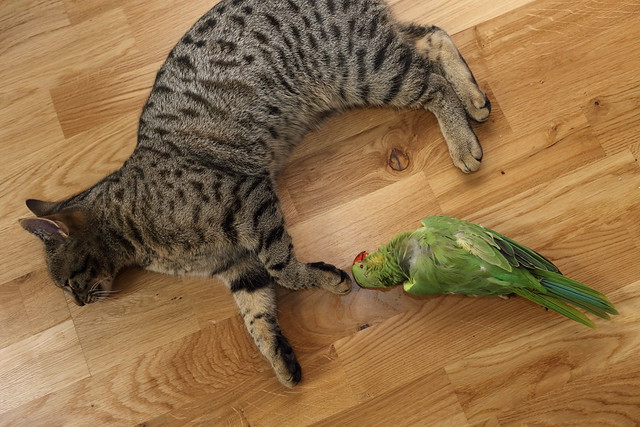 I often bang on the window to make them fly away before he can get at them. Like most cat owners I do not like to see my cat hunting and killing animals but it is natural and I have to accept it.

One reason why I don’t like him eating mice is because they sometimes have parasitic worms in their gut which he ingests and therefore he might acquire a worm infestation. Of course, I also feel for the mouse. I have an admiration for mice who stand up to cats. You hear their squeak as they go up on their hind legs and try and face down an enormous domestic cat with great courage. However, at that point their life is about to end. Sometimes I can save them because they wriggle into tight corners or my cat takes too long to kill.

I save mice by throwing a towel over them and then scrunching up the towel around the animal. I then take the towel out to the garden and releasing the mice at the base of the garden where I hope that my cat will not find them. I feel that I’m quite adept at saving the lives of mice. The main reason, now that I think about it, is that my cat, like all domestic cats, takes his time to kill them which leaves a window of opportunity for me to save lives.

Cats do not torture mice as is often stated. They don’t take pleasure from torture because they don’t know what the word nor the action means. They take their time because often they have scarce opportunity to exercise their natural hunting desires and therefore they wish to extend the moment. Or sometimes they are cautious because they are badly practised and they want to avoid being bitten.