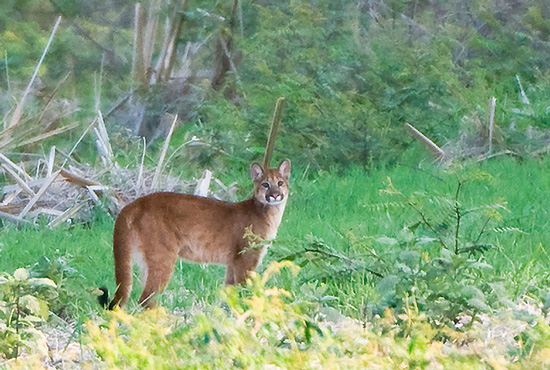 The map below shows you where the cougar lives. The picture above is of a cougar in Brazil (Pantanal). It is by Greg S. Garrett (Flickr). The date of this post is important because historically wild cat distributions have shrunk and become fragmented. The map will inevitably change over time. Scientists tend to use the name “puma” in preference to cougar.

The map was made by me, Michael Broad, based accurately on the IUCN Red List map. The IUCN have an obligation to keep their maps up to date because their role is in monitoring conservation and how threatened the species are.

As the map can be enlarged by using the controls to the bottom right-hand corner, visitors can drill down to discover the countries in which the cougar lives.

As can readily be seen the cougar is found in all the countries of South America and those in Central America, through Mexico and up through the United States and Canada. This is the largest geographic range of any mammal that lives on land in the Western Hemisphere.

It can be seen, therefore, that the cougar is a very adaptable wild cat because over this enormous range there is also an enormous range of habitats. For example, this cat can be found in the high Andes up to 5,800 meters above sea level in southern Peru.

In addition, visitors can readily see that the cougar was eliminated from the entire eastern half of North America within the short space of 200 years after the colonization of North America by Europeans. I say the entire eastern half of North America but it can also be seen that there is a small island of cougar habitat in Florida. This is a remnant sub-population of the cougar which is commonly called the Florida Panther and it is endangered. I asserted some time ago that there might be a conspiracy by businesses to eradicate it.

The countries in which the cougar is native are as follows:

Because of the wide range of different habitats under which this species of wild cat lives, its description and size also varies in line with the habitat. The cougars from Chile and Canada, which are at the extreme northerly southerly limits of their range weigh about twice as much as those found in the tropics.

In the equatorial rainforests of Peru the smallest cougars are found at only 28 to 30 kg. The colour of the coat (it’s pelage) also varies geographically. The cougars living in the warm more humid areas tend to be darker than those living elsewhere and those inhabiting drier habitats are lighter coloured.

The source material is Wild Cats of the World, IUCN Red List and Myself