I’ll tell you why Siamese cats are called Siamese. In Southest Asia there are pointed cats (cats with dark extremeties). Nearly all of these cats are not bred by cat breeders. By the standards of the West they are random bred cats. But they probably have purer genetics that purebred Siamese cats in the West such as in America. 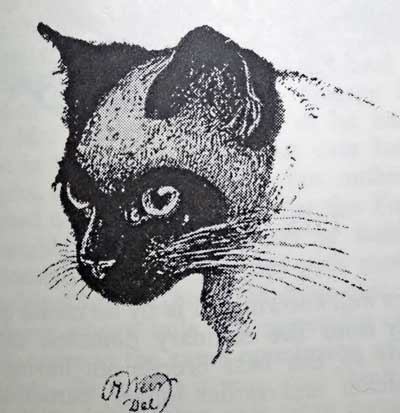 You’ll find these Siamese cats in Thailand. Before 11 May 1949 Thailand was called Siam.

When you add ‘ese’ to the end of a place name is describes the inhabitats of the place where they live. So we have Chinese, Maltese, Japanese et cetera. The added ‘ese’ is called a suffix.

When you add ‘ese’ to Siam you have Siamese. This means the cats or people who inhabit Siam (now Thailand). So Siamese cats are domestic, stray and feral cats who live in Siam. They also live in many other countries nowadays. In the West they are nearly always purebred, pedigree cats.

Why don’t we call Siamese cats ‘Thailandese cats’. Well, the reason is because the first Siamese cats brought to the West, specifically England, took place in 1886. At that time they came from Siam. As it happens these cats were rather sickly. They had worms.