If you have experienced, or are currently experiencing a lost or missing cat, it can be a very stressful time. These feelings are understandable because your cat is part of your family and you sincerely want your cat to come home.

I’ve been blessed to work with people and their lost cats (as well as many other types of animals) for over a decade. Thankfully, there have been many success stories along the way. The missing pets I work with are not only from the United States, but are also from all over the world. While many of the animals are reunited with their families, some aren’t able to return home and others may choose not to return home.

While there are many obvious reasons a cat won’t be reunited with their families, there are also many not so obvious reasons. One obvious reason would be that they left because something frightened them. Examples would include any number of unexpected loud noises such as fireworks going off, a car that backfires or someone firing a gun. They will not return until they no longer hear the noise and they regain their confidence. Another such case of something frightening them is if a predator chased them away. If they feel like they are still in danger, they will not return home until they feel the predator is gone.

Another obvious reason that cats may leave their home is if they haven’t been spayed or neutered and they leave to seek, shall we say, companionship. This can be the case several times per year. Even those cats that have been spayed or neutered will sometimes develop an overwhelming desire to go out and explore their surroundings.

Cats have been known to be perfectly content to view their outdoor surroundings from a window for years. Then one day, they decide to slip out to get a closer look. Often these cats will begin exploring new areas and before they know it, they can be miles from their home. Sometimes they will become confused or fall into harm’s way, especially when they are in unfamiliar territory.

Cats that are lost can sometimes be taken in by a different family. Some families may keep the cat indoors and take care of them while they actively look for the original family. Others wait to see if anyone posts a sign or show up at their door looking for the lost cat. Still others may simply choose to keep a cat because they like the cat or their children have fallen in love with the cat.

I’ve known people to say that the original owners must not have cared much for the cat since they let it get lost in the first place. Of course while that may be true in some cases, that’s not true in most cases. After all, accidents can happen and cats can escape their home without someone noticing. I’ve known this to happen on more than one occasion. 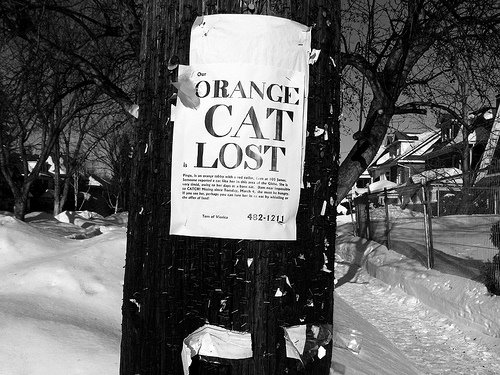 A not so obvious reason that cats may choose to leave their homes and not return is that they’ve fulfilled their purpose with a person or with their family. Like us, animals come into this realm of existence with a specific purpose or mission to fulfill. Some refer to this as your life’s path. Not all animals have more than one mission during the same lifetime, but some do. So, some animals, therefore, have been known to leave because their life’s mission may be taking them in another direction.

I recount one example in particular where my client had gone through a divorce and missed having a companion in her life. She decided to adopt a kitten to keep her company and provide her love. She and the cat lived together for nearly ten years and were very happy. She loved the cat but, always yearned for a human relationship and a family. She finally met the man of her dreams and in short fashion they started a family.

Shortly after the first child was born, her cat left home and never returned. She felt sad and blamed herself for not paying attention to her cat. She often wondered if the cat didn’t like the family and felt neglected. In reality, I firmly believe that her cat had fulfilled its purpose of being with her and had moved on to help someone else in a similar capacity.

At the end of the day, I always tell people to never give up on finding a lost cat or any missing animal. As long as they are alive, there’s always hope. However, always consider that there are many reasons that they may leave and not return.