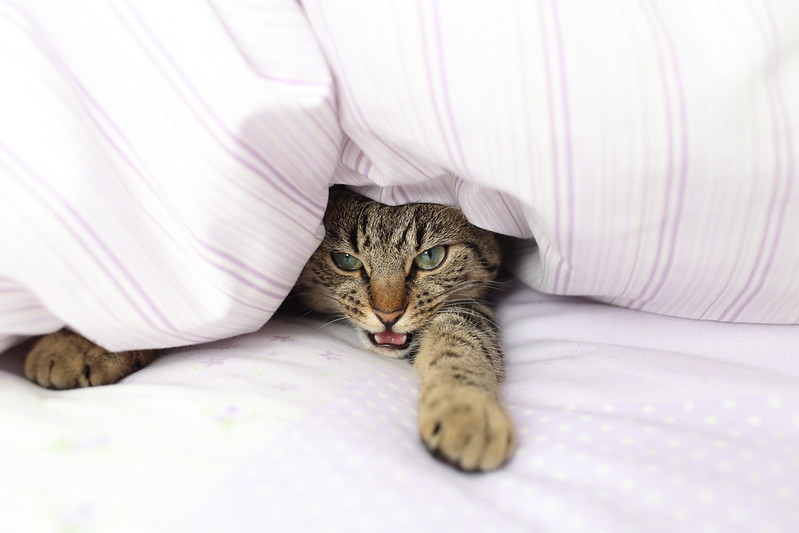 Above: My cat under the covers larking around. Photo: Michael.

Domestic cats crawl under blankets to:

A concern is that cats cannot breathe properly under a blanket or a duvet cover. A domestic cat will know when it is time to vacate the den under the blanket. There is no problem with a cat breathing properly. If the cat finds it uncomfortable under there for whatever reason they will vacate the place.

You have to be careful that you don’t fall asleep with your cat under the duvet with you. You don’t want to cause an accident to happen with you rolling over onto your cat. Your cat will escape but it wouldn’t be particularly pleasant.

It’s a personal trait whether a domestic cat likes to go under a blanket or the bedsheets with or without their human companion. Sometimes cats like to play under sheets or blankets because it’s fun. They can nose around and it appeals to their inquisitive nature.

SOME MORE ON CAT EMOTIONS:

Printer causes curious kitty to twitch. Is this true?

A cat responds defensively to the sounds and movements emanating from a computer printer. We know what twitching is but ...
Read More

Size difference between humans and cats makes them vulnerable and fearful, a dog study suggests

I have always believed that we don't give enough credence to the possibility that the size difference between humans and ...
Read More

Why don’t domestic cats express their emotions through facial expressions like humans?

Domestic cats, in general, have this deadpan face. It is not entirely expressionless but, compared to humans, cats' faces are ...
Read More

After spaying, how does a female cat feel?

It might be fair to say that female cats are more likely to feel permanently less optimistic and less calm ...
Read More