The answer to this question is actually straightforward but the first point to make is that domestic cats do not find all smelly stuff interesting (pretty obvious I know). So the question is actually poorly formulated. Indeed, cats recoil from a lot of smelly objects. These are often household chemicals of some sort, perhaps a cleaning material.

Cats love shoes because of the heavy scent of their SO human. Picture in public domain.

But cats do like smelly objects if they smell of their human companion or are produced by that person. That’s the key to the entire matter. They love the smell of the human companion and it can be any type of smell that the caregiver produces (without going into too much detail!). In fact bathroom smells can be very exciting to a cat. It makes their day. And shoes are great too as they can be particularly pungent. And wet bath towels are good too because the moisture enhances the body odour of the person.

Video – full of F1 Savannah cat action and an obsession with the smelly stuff particularly feet!

This is my cat in my towel. He was obsessed.. 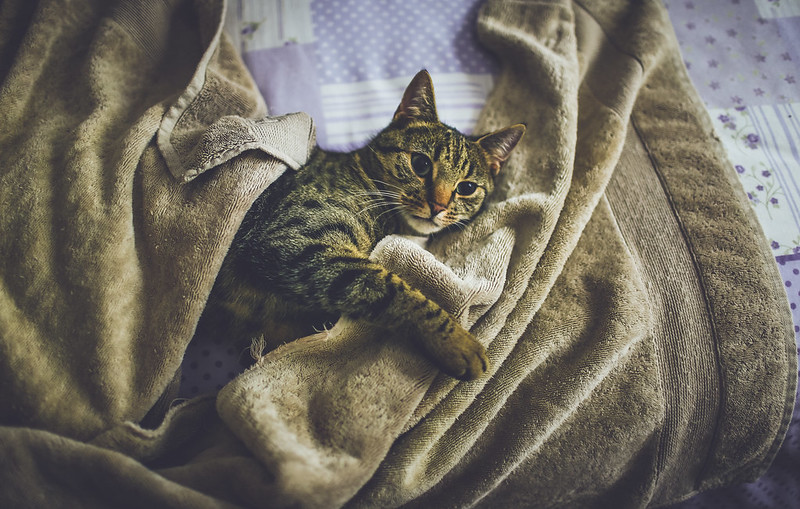 This is because the smell belongs to a friend of theirs and therefore it is welcome and reassuring. Cats rely far more on smells than humans, as we know. Smells have a much bigger impact on their lives and they rely on them to identify objects. But cats don’t like smelly stuff if it belongs to a complete stranger. They detect the difference instantly and may retreat.

To reiterate, in response to the question, “Why do cats like smelly stuff?” We have to say it is because the smelly stuff has been produced by their human caregiver. That’s what the question is all about.

There are other things unassociated with their human caregiver which they do like the smell of as well such as catnip. We all know about this too. Another similar “cat drug” is Matatabi which has a similar effect on cats. I have found that cats are also fascinated with the smell of bleach. They can be attracted to kitchen sinks which have been cleaned with bleach. On one page I have the story of a cat’s name is Ozzy who loves to be with his peaches because of their smell. I decided that it was not the peaches which attracted him but the very diluted bleach which had been used to wash the peaches at the manufacturers. That’s my theory.

F1 Savannah fascinated with the smell of this cloth. Photo: screenshot.

I don’t think anybody has actually worked out the reason why domestic cats like the smell of dilute bleach but they do. I would like to hear some comments on that if I make. Anybody with a theory should please write it in a comment.

Lastly both dogs and cats react positively to some pheromones that calm them. These are often used to calm cats and dogs suffering from separation anxiety. The products can be smelled by cats and dogs not humans. Cats have glands that produce these pheromones.