Cats sleep about twice as much as humans because this is the typical sleeping pattern of a highly efficient predator. The domestic cat has time on his hands and uses the time to sleep and dream. Cats can fall into a nice sleep at the drop of a hat. This sleeping pattern is inherited from his wild cat ancestor. 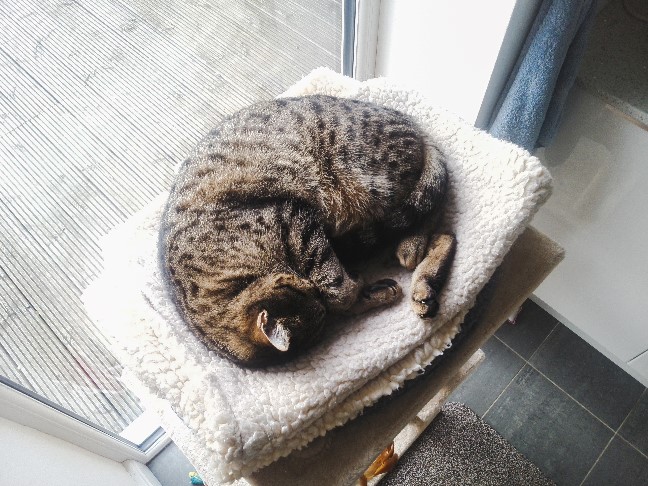 Over a 24-hour period, the average sleeping time of the domestic cat is about 16 hours. Typically, healthy humans sleep around eight hours over the same period. So cats sleep twice as much as humans do. An interesting statistic is that if your cat is nine years of age she has been awake for a total of about three years.

We know that adult humans sleep at night in one block. Or at least we try to and if we are disturbed or if we wake up we normally don’t like it. Cats however indulge in many short periods of sleep during each 24-hour period.

There are three types: the brief nap after which humans have coined the phrase ‘catnap’, the light sleep over a longer period and the deep sleep.

Feline light sleep and deep sleep alternate. If a cat is settling down for a catnap she drifts off into a light sleep lasting about half an hour. She then drifts into a slumber at which point she experiences deep sleep for six or seven minutes. This is followed by another session of 30 minutes of light sleep and so on until she wakes up.

During periods of deep sleep your cat’s body relaxes. Typically she rolls over onto her side. My cat twists and rolls over with his belly pointing skywards and his arms outstretched. His head is upside down. He is totally relaxed and enters deep sleep during which he often dreams. Sometimes he will enter a deep sleep by simply curling up and covering his faced with his paws (see photo).

I think web surfers and cat owners know by now that domestic cats do dream. You will notice frequent twitchings and the quivering of ears and whiskers. Also paws sometimes move. Your cat may make sucking movements and he might make some sounds such as general mutterings. He might make sudden movements as if interacting with a hostile cat. There are sessions of rapid eye movement which are clearly noticeable below the eyelids. Except for the movements described the body is immobile.

Very young kittens only experience deep sleep lasting for about 12 hours every 24 hours. After about a month they begin to sleep like adults.

The above information comes from a study by Hoofdaker RH entitled: Behaviour and EEG of Drowsy and Sleeping Cats published in 1966 by Holland via Dr Desmond Morris’ excellent book Cat World. My thoughts initially disagreed with the above. I always felt that domestic cats did not sleep anywhere near as long as the Internet repeatedly tells us. Domestic cats do a lot of snoozing and have periodic bouts of deep sleep. However, the domestic cat can easily be awakened from deep sleep and when they’re snoozing they are alert. You can tell by the fact that their ears are moving to pick up sounds behind them or in any other direction. I’m sure that a lot of cat owners believe that their cat is sleeping when in fact he is snoozing or sleeping very lightly.

I wonder whether the domestic cat has evolved out of its wild cat habit of sleeping for long periods having efficiently caught and fed on prey. Domestic cats live artificial lives without the need to catch prey. Therefore they don’t need to have periods of sleep after bursts of intense activity. I suspect that they snooze more than we think and that their periods of genuine sleep are less than the 16 hours referred to by Dr Desmond Morris.