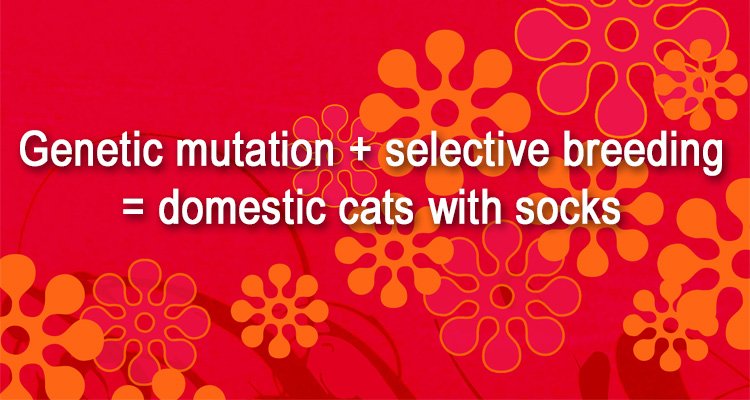 To get straight to the point the reason why domestic cats often have white socks is because during the early centuries of cat domestication people liked to see rare tabby cats with white fur on their paws so they made sure there were more. Today they are called tabby-and-white cats. They are not a breed but the term decribes a coat type. 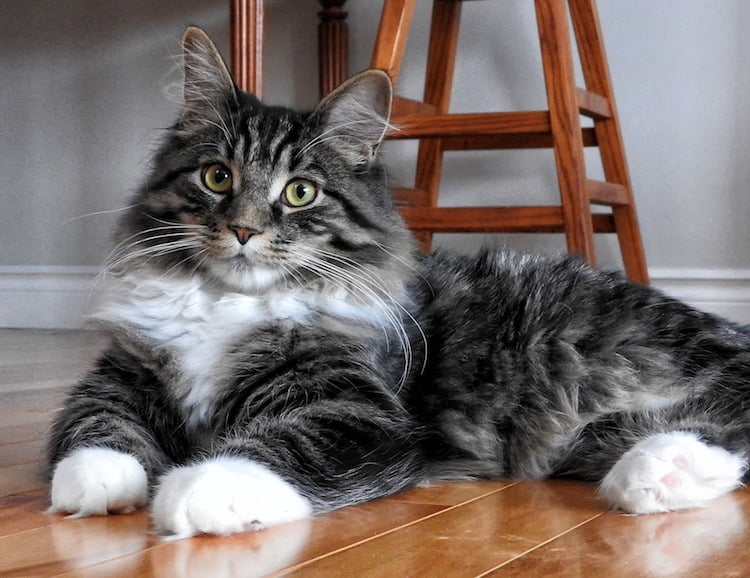 Tabby cat with white socks. Image by skeeze from Pixabay

At the beginning all domestic cats were tabby cats because their wild cat ancestor, the North African wildcat is essentially a tabby cat. So the domestic cat inherited their wild cousin’s coat.

Genetic mutations occurred as is normal in nature and some domestic cats had white paws. If these cats had been wild they would have died out through natural selection because white paws would have ruined their beautiful camouflage and they’d be easier to prey upon.

But as they were domestic cats living with people, natural selection, as invented Charles Darwin, did not take place. What replaced it was selective cat breeding i.e. artificial selection. Thousands of years ago the first tabby cats with white socks would have stood out from the crowd and been regarded as special and different. People were attracted to them and they made sure that they bred to produce offspring and that the kittens survived.

Gradually cats with white socks became commonplace. And gradually through more genetic mutations tabby coats become solid colours and tortoiseshell coats and so on. And these cats also had white paws sometimes.

In conclusion, white fur on domestic cat paws (aka ‘socks’) was a feature which pleased people at the time, say 5,000 years ago, so they made sure these cats bred to create more. I wonder if there were professional cat breeders in those days. I believe that there were. They certainly bred kittens during the time of the deity Bastet for sacrifice (c. 1070–712 BC).

Selective cat breeding is the method behind all of today’s cat breeds. This has taken many of the breeds far away from their genetic origins such as the Persian. Selective breeding has also altered the original appearance of some breeds such as the Turkish Angora and Van. The reason? Because breeders believe that they can ‘refine’ a cat’s original and natural appearance. This is a dangerous process as aesthetics are in the eye of the beholder. Also a lot of people like the uniqueness of the original cat rather than some souped up artificial creation cooked up in the backroom of someone’s detached home in Florida.

SOME MORE ON THE PIEBALD GENE:

Picture of a cobweb leopard

Cobweb leopards exhibit a form of vitiligo which in humans produces patches of pale, white skin due to a lack ...
Read More

Yes, the title is complicated. Deliberately so to catch the eye as does the cat who was adopted as a ...
Read More

White-and-black cat with remarkably large and even spots

I am unsure if this is a genuine cat. It looks like it because the black spots are made of ...
Read More 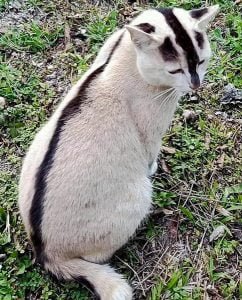 You've probably never seen a domestic cat coat like this before. The coat is bicolour meaning two colours: white and ...
Read More 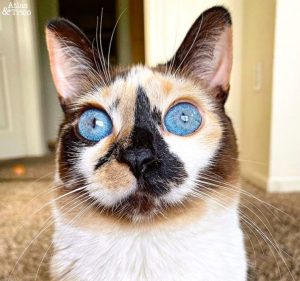 What causes the range of eye colors in cats?

The total amount of melanin (pigment) in the iris of the eye determines the range of eye colours in cats ...
Read More

Why are domestic cats white?

The question effectively asks why cats are white all over. It is because they have a dominant gene symbolised by ...
Read More 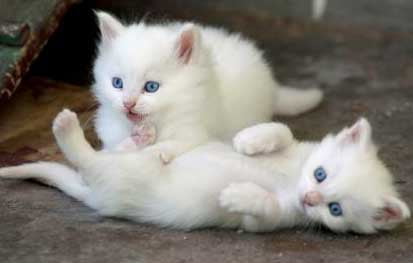 This lady wants to modify her cat's behaviour. He is a 7-month-old Turkish Angora (TA). She didn't realise it until ...
Read More
Please comment here using either Facebook or WordPress (when available).