↓
Home→Cat Health→spaying→Why do veterinarians sterilize cats with a gonadectomy rather than a tubal ligation or a vasectomy?

Vets in American nearly always sterilize female and male cats with a procedure called a gonadectomy. This operation is more commonly called spaying (female) and neutering (male). Veterinarians rarely if ever consider an alternative which is for females the tubal ligation (closing a cat’s fallopian tubes) and for males the vasectomy (blocking sperm from reaching the semen).

There are several reasons, based on my research, why American veterinarians do not even have on their radar the possibility of carrying out a tubal ligation or a vasectomy. One of them apparently is that they are not taught it at vet school! Secondly, they can go wrong in that sperm might get through after a vasectomy and thirdly the tibal ligation is apparently a more delicate operation which may put some veterinarians off.

Fourthly, a gonadectomy results in a cat who is healthier and who loses those unwanted behavioural feline problems associated with having their gonads: testes or ovaries. Some vets might consider that all domestic cats need the more invasive operation to make them better pets. 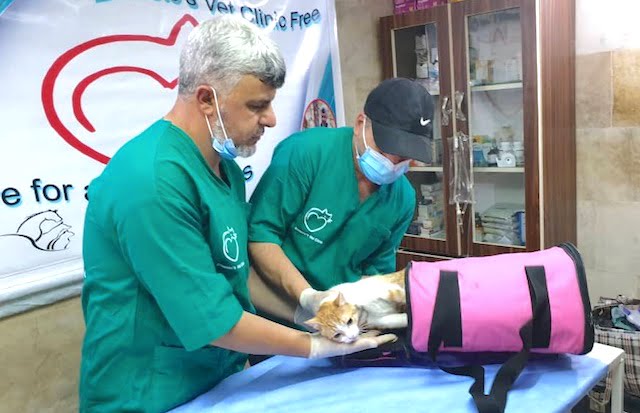 First cat brought in to the clinic for spaying in Syrian clinic.

The specific operation for females is called ovariohysterectomy and consists of the removal of most of the female’s internal reproductive system including the ovaries, fallopian tubes and the uterus. It stops her going into heat and prevents mammary carcinoma and pyometra. For males the removal of their testes (orchidectomy) has the added advantage of curbing potentially unwanted behaviors. The prime reason for both operations is to stop reproduction.

So the cats, after a full spaying and neutering, are better behaved and more amenable to living with people and they live longer lives. That’s the plan and the reason why, in general, veterinarians choose gonadectomies.

Female cat spaying. This has to be at 92% for a stable cat population. Image in public domain.

However, there will be cat owners who would like to make a decision about alternatives. These are concerned cat owners would like veterinarians to present them with choices. For example, it may be the case that a male cat is very placid and well-behaved and therefore does not need his behaviour altering through neutering. For that cat it may be better to do a vasectomy which prevents sperm entering the urethra and thereby prevents fertilisation. Reproduction is stopped and behavioral characteristics retained. Also both operations slow the metabolism which calls for a different diet.

I’m not a veterinarian and therefore I struggle with finding a reason why veterinarians don’t offer these alternative options. There might be increased complications after the spraying operation compared to a tubal ligation. If that’s the case then the latter has benefits over the former. Does a female cat react psychologically to the removal of her entire reproductive system? Has anybody done any work on that in a study? Do we know the degree of serious complications arising out of the spraying operation compared to the less invasive tubal ligation operation? 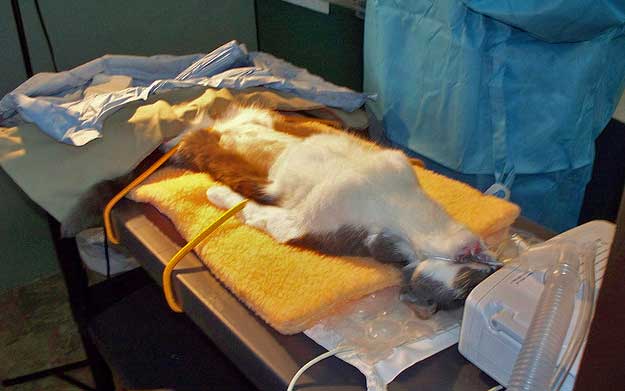 In 2017, Dr Brennen McKenzie, MA, MSc, VMD, cVMA, writing online on the Veterinary Practice News website said that there are no “controlled research studies comparing tubal ligation or hysterectomy to ovariohysterectomy or ovariectomy. That is three years ago and I suspect that we still don’t know. It appears that veterinarians have shut out the possibility of alternatives and simply go for spaying and neutering automatically.

I would prefer to have options and to discuss those options with my veterinarian to find the best path forward both for my cat and myself.