Fifty-seven percent of cat and dog owners in Sweden have health insurance for their pets compared to 3% in total in USA. 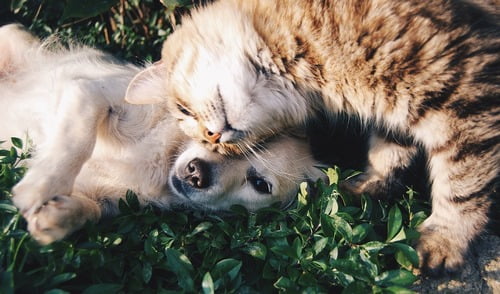 Sweden leads the way in pet health insurance. The information that I have tells me that in the United States, in 2002, only 1% of cat owners and 2% of dog owners, or 3% in total, had health insurance for their pets compared with 15% in England and 57% in Sweden. More up-to-date figures are not that dissimilar with around 20% of cat and dog owners having insured their pets in the UK. Wikipedia states that only 0.7% of pets in the United States are covered by pet insurance. The difference between the USA and Sweden is stark. Why is this?

I searched high and low with the help of my friend Google but was unable to find an answer. Therefore, I have to make up an answer myself and this is it (Flawed or incorrect? Possibly).

The Swedish have a greater sense of community than Americans or the British. By this I mean that they are happy to distribute wealth more evenly and fairly. They are also more eager to create a fairer society.

How have I come to this conclusion? Well, in Sweden they pay higher taxes than in most countries as far as I’m aware and the citizens of Sweden accept this because their tax subsidises a lot of things which are complimentary to their work which compensates for the high taxes. They can also see the benefits of paying higher taxes. In addition, I would argue that taxation is a form of redistribution of wealth.

Pet insurance is about risk and reward. Pet insurance also irons out unfairness. Let’s take two people both of whom have adopted a cat. Both of the cats are insured. One of the cats is inherently ill while the other is inherently healthy. The premiums paid by the cat owner of the healthy cat go towards the veterinary care and treatment of the unhealthy cat. If the cats were uninsured than the cat owner of the unhealthy cat would have to pay out a lot of money for medical treatment while the owner of the healthy cat would pay almost nothing by way of medical care. One cat owner would have been very unlucky while the other would have been very lucky. The pet insurance ironed out the differences between the lucky person and unlucky person creating a more egalitarian society.

The desire for a more ordered and egalitarian society was evident in Sweden long before it was in the United States. The USA is a wonderful country where dreams can still come true, wealth can be made. It is a place where people like the freedom to achieve their dreams. Arguably, it is a more individualised place by which I mean individuals are allowed to achieve on their own terms but a more competitive place commercially than perhaps any other country on the planet.

This has a tendency to create the greatest inequality between the richest and the poorest. A survey by Allianz found that the USA has the highest wealth inequality. Surprisingly, and this disproves my theory, Sweden came second in terms of inequality! This result is set against Sweden being thought of an egalitarian nation.

These are simply my ideas. I am thinking allowed. As you can see I dictated this while I researched and my research came up with a surprising result. However, I believe my theory has some merit. The reason why Sweden has the highest amount of pet insurance must be to do with their culture. This is a cultural thing rather than purely about personal finance. It may be notable that the Scandinavian countries regularly come out on top in terms of the happiest countries (if it is possible to measure the happiness of a nation accurately). It might be fair to argue that happiness is associated with a community spirit and fairness.

All surveys on individual happiness come to the conclusion that friends and community are major influences. My personal experience bears this out.