↓
Home→Sounds→hiss→Why is my cat kneading and hissing at the same time?

Our cat has been getting into our bed and kneading the comforter and hissing at the same time, sometimes when we are in it. Do you know what this means? Thanks!

Hi… thanks for visiting and asking. I will assume the “conforter” is what we call a “duvet” in Europe; a down or foamed filled blanket with a cover.

On the face of it these are signs of conflicting emotions. Kneading is a reflex kitten response to stimulate the flow of mother’s milk. When it is done to us (say on our legs or in this case the comforter) it is a throwback to the kitten/mother time signifying that the cat sees us as mother cat.

Hissing is a defensive/aggressive sound to try and frighten off intruders. It is also instinctive. A stray cat we feed does it because he is unsure of my two cats when he comes in to be fed.

I think, though that kneading and hissing can go together. Someone might have a better answer but my theory is this (and this is not researched but straight out of my poor head).

When a kitten finds a mother’s nipple there may be some competition from siblings. A kitten normally sticks to the same nipple when feeding on mother’s milk (colostrum).

In the case of your cat this competition may have resulted in a bit of hissing to ward off another sibling from the chosen nipple. The kneading follows to stimulate the flow of milk and the purring also follows to communicate with mother that all is well. Kittens can purr while drinking the milk.

That I think is the reason. In other words for your cat the close interaction with mother while being nursed had an associated element of unwanted competition which led to the two actions, kneading and hissing becoming part of the same process.

Hope this sounds sensible! Any other suggestions in the comments would be welcome.

Picture (added by Michael) of a cat kneading, sucking and purring on a throw: 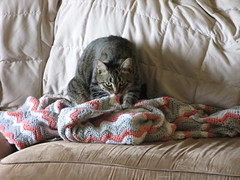 Why is my cat kneading and hissing at the same time? to Why Do Cats