Why Owning Exotic Cats Is Wrong 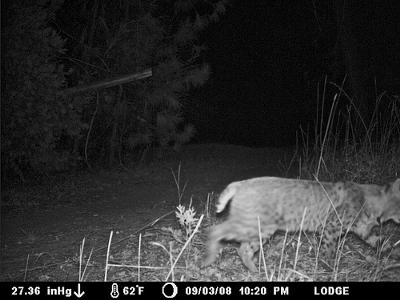 This is where the bobcat should be left unmolested, the wild. Photo camera trap by randomtruth (Flickr)

This is controversial, I suspect. It goes against the thoughts and principles of the Feline Conservation Federation of which I am a member. However, I am entitled to my views.

I am prompted to write this having read Amy Flory's article in the July/August edition of the FCF magazine.

She bemoans the gradual growth of legislation in the USA banning the keeping of exotic animals or animals that are more accurately described as wild animals. In this instance wildcats and mainly the smaller wildcats that can make pets of a sort. In this post I am referring to wild animals not wildcat hybrids.

Amy says that the main opponents of exotic animal owners are the animal rights groups, who she blames for disseminating misinformation about exotic pet ownership. She says that they don't understand.

I am not sure that Amy Flory understands. As I see it, the concept of humans "owning" wildcats is not a good thing for the cats at a fundamental level in the long term.

Firstly, it creates the culture that we, humans, have the right to "own" a wild cat. I don't think that we have that right.

Secondly, creating the culture that we have the right to own a wildcat leads to an unbalanced situation in which the cat is more likely to be treated as a commodity for the pleasure of the person. This demonstrates a lack of respect for the cat.

Thirdly, owning wildcats encourages trade in importation of wildcats from their natural habitat. They can be captured as cubs and sold as pets. This is not good for wildcats.

Fourthly, if a wild cat is owned by a person in the USA it is highly likely that the cat will be kept in an enclosure, sometimes something worse like the living room! Wild cats often need very substantial ranges in which to behave naturally. Small enclosures are unnatural. Also some escape and get shot.

Fifthly, the culture of owning wildcats undermines the better concept (
for the cat) of protecting their wild habitat. All efforts should be directed at encouraging people to learn to live in harmony with wild animals including wildcats and not encouraging their gradual extinction in the wild. The ownership of wildcats now will lead to that being the only form of relationship that people will have with them in the future.

Sixthly, captive wildcats need to be bred to supply others who want to own them. The relatively small numbers of founding cats leads to inbreeding and ill health, which is counter to the well being of the cats. This is the opposite of the objectives of wildcat lovers who want to live with them.

We should curb our desire to live with wildcats no matter how much we love and admire them. We desire this for our pleasure. The pleasure for the cat is to be left alone in its own habitat in the wild. Let us do right by the cat. That, after all, is the objective of the FCF and its members.

We need to think long term and more profoundly, set our sights higher and think wider if we are to achieve what is truly best for us and the wild cats.

Why Owning Exotic Cats Is Wrong to Wild Cat Species