In this compact post, I’ll explain why you want your cat to scratch. Firstly, I don’t mean to scratch you, the cat owner. I mean to scratch an object. The picture below is one of five scratching boards I have in my house… 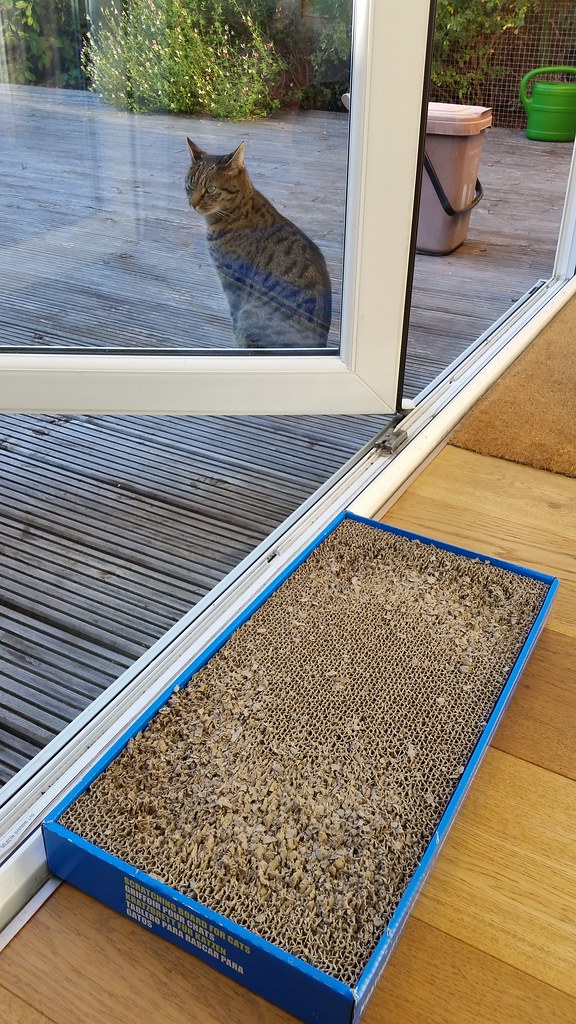 A human analogy would be the right to privacy or freedom of speech. It is that big a part of the life of a domestic cat. It is just below eating, drinking and sleeping in terms of importance!

Because a concerned cat owner respects the unwritten rights of their domestic cat and because cats have a need to scratch objects, they want them to do. It allows a cat to express his natural desires. It makes him relaxed and feel at home. He’ll have plenty of cat mojo in the words of Jackson Galaxy.

If we were prevented from doing the things that were natural to us (excluding nasty and criminal activities!) we’d feel unhappy and peeved.

Also when a domestic cat scratches an object, hopefully a cat scratcher of some sort, he is marking territory in a confident way. The alternative is far worse: spraying urine over your best couch.

Scratching not only marks territory by leaving a visual sign (the scratches) and depositing scent, it also stretches the back, legs and toes and sloughs off the outer sheath of the claws to make them sharp again.

It is an important, natural, innate activity and you know you want your cat to be happy, don’t you?

Buy several great cat scratchers – vertical or horizontal – add some catnip or your scent and place them at ‘crossroads’ in your cat’s territory. I think it is best to have several cat scratching boards because you can, then, place them on crossroads and boundary lines to his territory and near the couch he was scratching. It makes it more certain he’ll use them. And they are damned cheap (cardboard horizontal boards).

I have found that my cat does not require encouragement to use the scratching boards (I have five). He dived in and used them from the get go. The catnip attracted him.

P.S. This article naturally leads to declawing. If you declaw you take away a lot more than your cat’s rights. You take away a part of his toes and give him intense pain and sometimes a lifetime of psychological distress and much more.