A customer is suing the Denver Cat Company after she says a cat bit her hand, and the bite got infected. 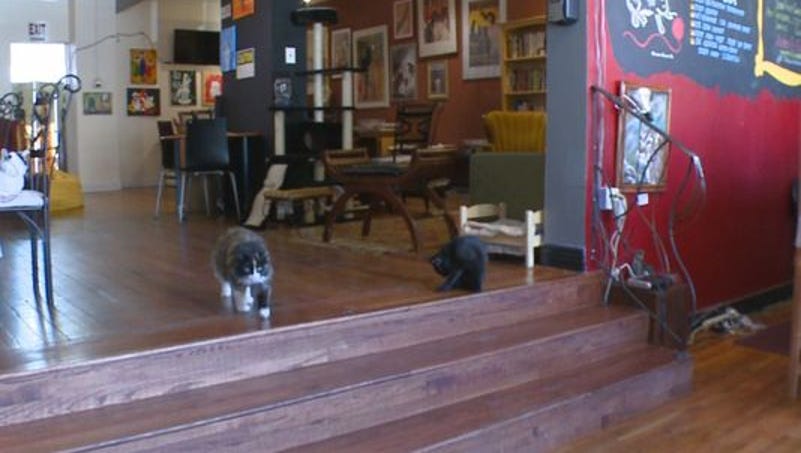 It had to happen but it should never happen. A customer, Sue Hodges, was enjoying the cats and coffee at the Denver Cat Company cat café when she was bitten by one of the cats. The bite become infected and required antibiotics. Time was taken off work.

“[Morpheus] flipped onto his back when my mom still had her hand out,” Jamrogiewicz told 9NEWS. “When she was going down to continue petting him, he bit her on her hand rather aggressively and wouldn’t let go for at least 15-20 seconds.”

There is a warning in the café that people pet cats at their own risk, as I understand it.

“pet at their own risk.”

Judging by what was said Morpheus was playing and got a bit aggressive but it was still play. The fact that the Morpheus would not let go indicates classic play in holding on and biting (but not at full force).

Sue Hodges should have known how to get out of this cat hold. She should have remained passive, not pulled her hand away and if needs be grabbed the scruff of the cat’s neck with her free hand. This would have induced the passive kitten mode.  Do you have a better technique?

By the time she had freed her hand it was bleeding in about 8 places she claims. She was treated at the café but decided that she had to attend a clinic because she thought the bite was infected.

The charge was $305. She asked the cat café owner for compensation in that amount. The owner, Sana Hamelin, refused.

They failed to agree on compensation. It is debatable whether compensation is due at all bearing in mind the warning. Customers are given due notice. I’d be surprised if Hodges has a case but she has commenced legal proceedings for compensation in the amount of $5,920 (a somewhat inflated figure compared to the original demand).

Hodges claims that the cat café knew that Morpheus was dangerous which is strongly denied.

The cat café’s arrangement with a local cat rescue to supply cats has been terminated by the rescue organisation because of the litigation. They got cold feet probably because of a fear of being sued themselves.

This has put an added burden on the café which is owned and run by Hamelin i.e. it is not backed by a large company but independently owned and managed. They don’t have a lot of cash and no doubt what has happened has made them have second thoughts about the viability of the business.

It certainly does cast doubts about whether something similar will happen again and if so it would probably be intolerable. It would make the cat cafe unworkable.

The litigation should fail, in my opinion. If not, all cat cafés in the USA will have to rethink how they can avoid litigation. It must come down to clear signs in the cafe warning clients that they pet cats at their own risk. All clients should be made aware of the sign. They may even have to sign a disclaimer on entering the place. But this erodes the pleasure of being in the place. Part of the fun is to interact with the cats.

I’d expect some cat cafés are reviewing their procedures.

Source: Pet at your own risk? Cat cafe faces lawsuit over bite