Treating an anemic cat with a blood transfusion of canine blood can only occur once. Picture in public domain.

The transfusion of blood from another species to another (called xenotransfusion), in this case, canine blood to a cat has been performed and it is still performed nowadays in some countries. It was performed recently in the UK when a friendly, female domestic shorthair cat, Princess, very suddenly became lethargic and withdrawn at home. She showed signs of severe anaemia and her condition was life-threatening. A veterinarian conducted extensive investigations which revealed a severe infection within her liver resulting in anaemia.

Her condition was deteriorating rapidly. Under these emergency situations and where, as I understand it, there was no ready supply of feline blood, it is possible to use canine blood on a one-off basis which is what happened and which saved Princess’s life. The story in The Northern Echo newspaper does not tell us about the limitations of such a treatment.

We can’t thank Wear Referrals enough for everything they have done for Princess. The dog blood transfusion saved her life.

A study published on the Pub Med website explains the limitations (Xenotransfusion with canine blood in the feline species: review of the literature). The scientists make it clear that cats do not fight the alien blood with antibodies because they do not have any naturally-occurring antibodies against a dog’s red blood cell antigens. Therefore there is no adverse reaction. Quite the contrary, cats receiving canine blood for the first and only time are reported to improve clinically within hours.

If a veterinarian tried to do a follow-up blood transfusion with canine blood into a cat later than 4-6 days after the first transfusion it would cause anaphylaxis which could kill the cat. That explains the limitations of this successful treatment which can only be carried out in an emergency.

Yes, fleas can kill kittens and we have a story today in the online news media to substantiate that statement ...
Read More

There are many possible causes of feline anemia. Therefore a diagnosis by a veterinarian is strongly advised to find and ...
Read More

This is a short follow-up to my previous article about the possible effect on domestic cats of electronic cigarette smoking ...
Read More 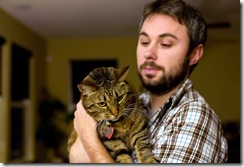 Hi,I just today had to put my 5 month old kitten to sleep. He had been tested early on for ...
Read More
Please comment here using either Facebook or WordPress (when available).