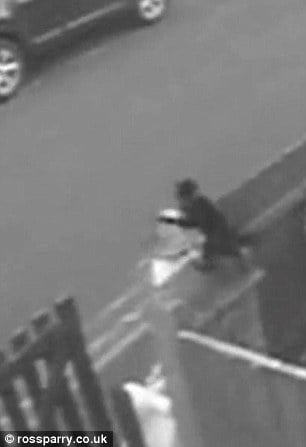 Stephanie Curwen, 24, was captured on CCTV cameras walking her dog Duke near her home in St Annes, Lancashire. She was filmed laughing as it jumped up to get the kitten before mauling it to death.

The CCTV picture above shows you the exact moment that Stephanie Curwen’s Staffordshire bull terrier type dog grabbed the black kitten in his teeth and dragged him off the fence to kill him with two bites.  A post-mortem indicated that the cat, Regi, died of a punctured lung – there were 2 bite wounds.

Curwen was out walking her dog in the Lancashire town of St Annes.  Her neighbour’s cat was outside. Curwen’s dog lunged at the cat. At the time he was on a lead but Curwen released him and then laughed when her dog chased the cat.

The evidence indicates that Curwen took pleasure in watching her dog kill her neighbour’s cat and on the face of it actively encourage it.  It was entertainment for her and her dog.

The attack was stopped by another neighbour, Craig Hargreaves, who was able to pull the dog away with ease. The dog did not resist. This tells us that Curwen could have easily prevented the attack but appears to have encouraged it.

When Mr Hargreaves picked up the cat he said he felt two heartbeats and then the cat died.

Curwen, in her defence, said that she thought her dog would not catch the cat and harm him.

The whole thing was captured on CCTV and as a result Curwen was charged with animal cruelty under the Animal Welfare Act 2006, prosecuted and found guilty as charged.  Her sentence would appear to be lenient by some people’s standards.  She avoided prison and was ordered to pay £200 costs and an £80 victim surcharge.  She was banned from keeping animals for 10 years.

The cat’s owner, Lesley-Anne Brockleburst, says she should have gone to prison.

“She seemed to be getting a lot of pleasure out of it so maybe it’s not the first time she’s done something like this….”

Lesley-Anne Brockleburst believes that if she’d gone to prison she would have learned a lesson,

“Hopefully then it might sink in what she did, and how cruel it was.  She’s not sorry for her actions, she hasn’t gone out of her way to apologise to me and my family.”

Mr Hargreaves, who as mentioned stopped the attack, says that Curwen does not have an ounce of respect for animals.

“I’m glad the whole thing has been sorted and she’s been punished for her actions.” 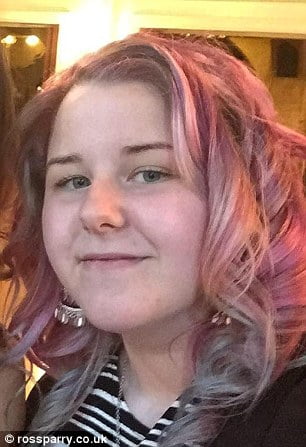 The picture above is of the dog’s owner Curwen.  This is the young woman who enjoyed the spectacle and does not have an ounce of remorse or regret what what she did judging by the reports that I have read on the Internet.  Above all, she does not respect animals. Her dog, sadly had the wrong owner and has not been put down but re-homed.

Source: Curwen sets her dog on kitten and kills him | Daily Mail Online