This is a short essay on the domestic cat for kids. It is written in plain English. It can be used by anyone if they wish.

A lot of people look after a domestic cat. In America there are about 90 million domestic cats and about 2 cats in every home on average. They are very popular on the internet where they make us smile. The word ‘domestic’ means that our housecat, which is a ‘species’ of cat, is basically a tame wild cat from North Africa and the Middle East. The name of this wildcat is the North African wildcat. 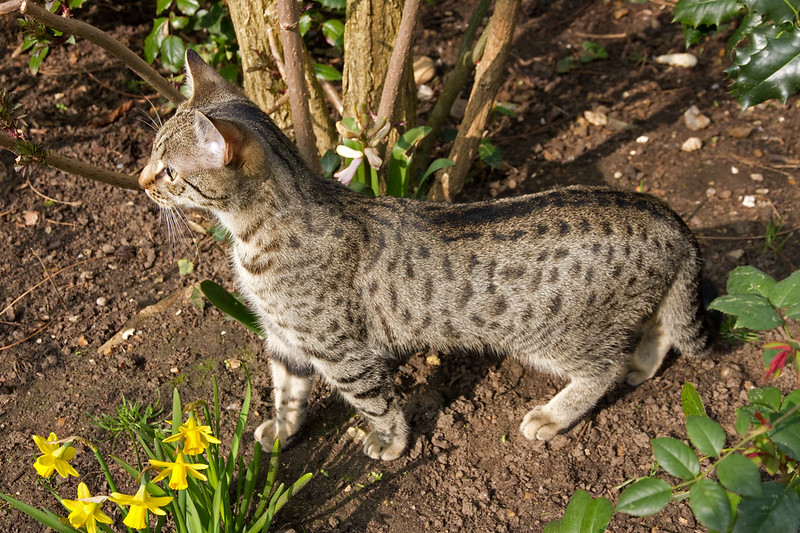 We should always remember that our domestic cat is not that far from being a wild cat. This helps us understand our cat better. Our cat’s behaviour and habits will help to remind us. Here is one example. Cats don’t drink much water. This is because the original domestic cats lived in very dry places.

The first domestic cats existed about 9,500 years ago. A North African wildcat made friends with a person. The friendship was good for both the cat and the person. As this companionship worked out so well, over thousands of years there were many more domestic cats because domestic cats made more cats. They are very good at mating and making kittens. We think that there are about 250 million domestic cats in the world.

The first domestic cats had tabby fur, just like the cat in the picture, on this page, whose name is Gabriel. This is because the wild cat from which they came had tabby fur. Over the years many more types of fur coat came into being. A tabby coat is a sort of cat coat that is good if a cat wants to hide. It is normally brown with dark markings of spots, stripes or swirls.

We know that the domestic cat is a small furry animal. It is a mammal. They have to eat meat to live. They are called ‘carnivores’ but they do eat some plants sometimes like grass. They are strong animals. They can run fast and jump very well. They like to hunt particularly when it is dark and when the animals that it wants to catch are out. In the home, hunting becomes play. The domestic has two weapons, his claws and his teeth. His claws are sharp and they ‘retract’ into the paw. This means the claw is hidden in the paw until needed.

The domestic cat has great hearing and a nose that can pick up all kinds of smells that we can’t. Their eyes can see in the dark very well. Their eyes are not as good as ours at seeing color. The housecat has almost magical powers. It is said that they know when an earthquake is about to come and they know when a very sick person is about to die.

The domestic cat feels pain, joy and sadness just like us. Their anatomy is quite like ours. When we speak of our ‘home’ we mean the house and garden where we live. For a cat, ‘home’ means a certain amount of space and it does not matter if it is a house or a garden. This is his territory (his place). It is called his ‘home range’. Cats don’t like doors because they get in the way of moving around his territory.

Because domestic cats are fantastic hunters and because they like to hunt, a lot of people are upset when they catch birds. A lot of other people say it is natural for a cat to catch birds. They also say that cats prefer to attack mice. People argue about this. Some people keep their cats inside to stop hunting real animals and also to keep them safer.

In America, the first domestic cats were brought over from Europe on ships around 400 years ago. Two cat breeds were created from these cats: the Maine Coon and the American Shorthair. They are both very popular. Most domestic cats are not pedigree cats.

There are two types of domestic cat. There are ‘random bred’ cats and ‘purebred’ cats. Some people call random bred cats ‘free-living’ cats. Free-living cats mate with other cats without anyone being involved. Purebred, pedigree cats always mate with cats chosen by people. These people are cat breeders.

All cats are one species which are called, in Latin: felis silvestris catus.