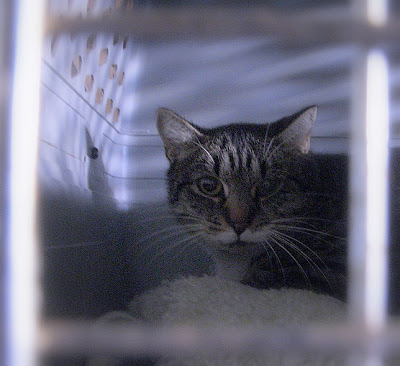 December 30th 2009. There are countless cases of animal hoarding. There is one today in the Wyoming News. A 60 year old man living in south Cheyenne (map marks the spot) admitted he could no longer cope. There were about 50 cats; 32 were removed. His house was unbearable (toxic to humans) for the animal control officers. One room was habitable (of sorts) for humans, the remainder of the house was a total mess. The cats were stressed and so was the man. So, what happened?

The interesting part of animal hoarding is the science and psychology behind it. At the beginning a cat hoarder is simply a cat keeper. Perhaps he or she has a couple of cats or a little more – no big deal. Then gradually, or quickly, the numbers grow. There comes a time when it gets out of hand and ACOs (Animal Control Officers in the USA) come it. There is a moment when the line is crossed from manageable to chaotic but the person does nothing. Why?

It is said that the underlying problem is that a animal hoarder is not doing it for the animal but for themselves. This is what Dr. Patrone says. The irrationality of it indicates that this is the case because it takes little awareness or intelligence to recognise when the conditions for the cats is detrimental to them.

A person who accumulates a large number of animals while failing to take account of the deteriorating conditions under which themselves and the animals live that affects the health of the animals.

The Reasons for Cat Hoarding

On the basis that the hoarder recognises that the cats are living unhealthily, yet does nothing, it would imply that they are not interested in the welfare of the cats or animals. On that reasoning cat hoarding is not an altruistic activity but an egocentric one. But my view is that animal hoarders do wish to help animals and are kind hearted but are not aware of the appalling conditions or, although they recognise that the conditions under which both they and the cats live are often very poor, they accept them because their own personal standards have dropped to a very low level due to an inability to cope or because of extremely low self esteem or both. And in my view it is the inability to cope for various reasons, the most common of which is possibly low self esteem, that creates this situation.

There are, after all, quite a high percentage of people with low personal standards of santitation and personal hygiene. This is not to be critical of these people. It is just a fact. Extend this characteristic to the situation where there are cats that are treated in the same way as many millions of people who are not cat hoarders (e.g. as objects and not truly companion animals of equal standing to us) and add in advancing age, dementia (in some cases), low self esteem and depression and this is the making of cat hoarding. My viewpoint is supported, I feel, by the statistics tabled below. Cat hoarders often don’t see a problem indicating a normalisation of extremely low standards. There are many people who are not animal hoarders who are like this. It also could be argued that kind hearted people often find life harder in a highly competitive and commercial world and therefore have greater difficulty in coping.

There is little in the way of studies or theories on or about cat hoarders, which is why I have had a go at it myself. The cause is unknown. This supports my theory that most often there is no medical or psychological cause. It is a great shame that the cat is hurt. But many millions of people who are not cat hoarders and who claim to care deeply for their cats hurt their cats because they view the cat as not quite deserving as equal treatment to a human (see Declawing cats as a good example).

What the Agencies Say

They concur with me, it seems, in saying that the “problem” of cat hoarding or animal hoarding is not a problem for the cat hoarder as for them it is a “lifestyle choice”. They say it is not a mental health or public health issue4. I agree the first but disagree the second assessment. Animal hoarding can be a public health issue for the neighbours. Most cases (57% of them) were reported by neighbours as the reason why the animal hoarding came to the notice of the authorities.

What Do You Think

Please have a say using this form….

Theory of toxoplasmosis and cat hoarding

After watching another episode of Hoarders, I felt compelled to do a google search to see what the link is between hoarders and cats, since they all seem to own at least 3 of them. Is seems that cat feces cause toxoplasmosis which is linked to schizophrenia. Maybe these people start off with a couple of cats, and then get infected and become obsesses with hoarding. one site even suggested maybe that this is a survivalist tactic in the cats genes.

From Cat Hoarding to Cat Facts