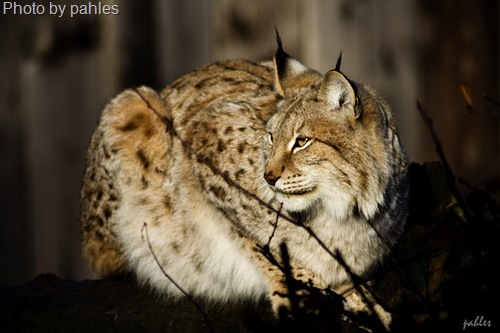 This is the largest of the European wild cats and the largest in the lynx family of which there are four. The three other are: bobcat, Canada lynx and Iberian lynx (extremely rare). The Eurasian lynx weighs from 40 to 48 pounds or 18 to 22 kg. Sometimes I can be a bit larger. This bob-tailed feline is found in the forests, scrub, woodland and rocky hills of northern Europe, Russia and Central Asia – a vast area. Parts are very fragmented, however.

Its coat is tawny colored with black spots and black tufts on its ear tips. This cat prefers large prey such as deer. It also hunt hares and chamois which is a kind of mountain goat.

The home range of the lynx can be as large as 115m² or around 300km². Wildcats mark their territory by using their sent to let other cats know they have crossed their boundaries. They do so by spraying urine and depositing feces. They also have special glands to release their scent in their chins, cheeks and tails, which they rub against objects within their territory.

Leaving scratch marks on trees which is called claw-raking, is a visual way for a lynx to warn other cats that this is its area. Scratching trees also releases scent from glands in the paws. Eurasian lynx, like other wild cats, checks its territory several times every day to examine the scent spots for intruders.

As to its current status, it is vulnerable in some areas but the Eurasian lynx population is largely stable, we are told.

It is classified as ‘Least Concern’ by the IUCN Red List.