Overview: Here are some facts about leopard cubs. A cub will normally be born as part of a litter of 1-3 but only half will usually survive into adulthood. A cub is born with eyes closed. The eyes open at about 10 days of age. A cub’s fur is grayer, longer, thicker and less well defined than when adult. The picture below shows this. They are able to accompany mother on hunts at about 3 months of age. At one year old they can fend for themselves and they leave “home” at about 18-24 months.

See a cute leopard cub in the wild in short video

From birth to independence

Leopard cubs are born after a gestation period of about 96 days but it can take anywhere from 90-105 days. Normal litter size is 1-3 but sometimes 6 cubs can be born in a litter. Most litters are 2 cubs. Apparently melanistic leopards have smaller litter sizes than normal spotted leopards.

One Ranger in India said that he saw more cubs in April than at any other time. In a Sri Lankan National Park most births took place during the dry seasons of July-September and February-March.

The reason? More prey animals available. In Kruger National Park it seems that litters are more likely to be born in the wet season which coincides with the peak in impala births and there is more cover. Birth dens are normally caves, thickets, hollow trees and abandon burrows or rock piles. Newborn cubs weigh between 430-1000 g. The fur is short and faintly spotted and they have black whiskers. 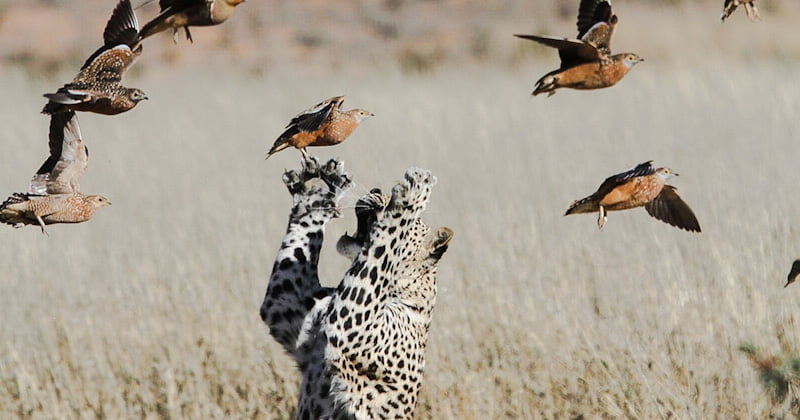 Leopard tries to grab birds in the air. Photo: Caters.

The mother will spend all her time at the den with her newborn offspring and leave the den to hunt to feed them. Her selection of a suitable den is very important at this time in order to protect them. Most cub mortality occurs during the first months of life. In the wild, cubs are preyed upon by hyenas, tigers and lions. Cub mortality is estimated to be 40-50%. Male adult leopards have been observed killing young cubs.

One leopard in Nepal was radio tracked for 168 continuous days. She was with 3, 20-day-old cubs. In the beginning she spent 33 hours with her cubs then left for 33 hours, returned for 11.5 hours and then left for another 36 hours. She spent more time with her cubs at night and at no time was she more than 2 km from her den.

While cubs are confined to the den the mother’s movements are restricted to a small area nearby. She can’t leave them alone for too long. She may move them every 2-5 days to different dens. 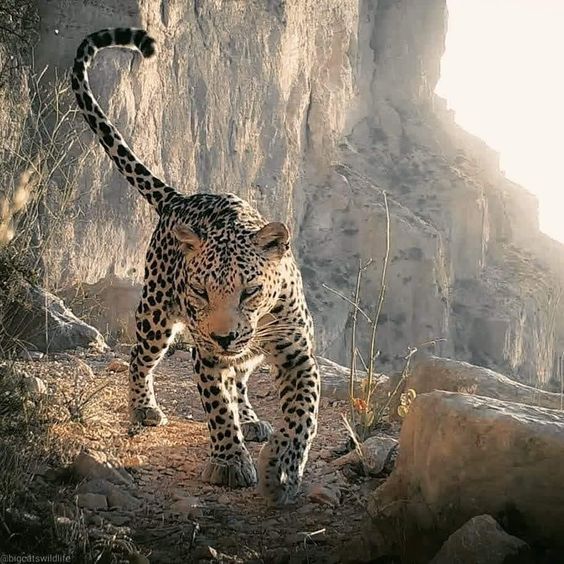 Leopard in mountainous territory. This is described as an Arabian leopard.

The cubs learn to play and hunt. You will see them pouncing on their siblings, their mother, leaves and sticks. When she is away, they hone their skills by stalking lizards, insects and birds. Sometimes they kill these animals when they are around 5 months old. Their permanent canine teeth appear at about 7-8 months of age at which point they can make kills.

The emergence of canine teeth “seemed to usher in a more positive approach to his environment” in reference to a cub being observed by a scientist. As leopards are able to live on small prey, among the big cats it is generally easier for them to catch and kill prey when they are young. And their mothers do not have to put in as much time schooling their cubs as do tigresses and lionesses. Lion and tiger cubs require a lot of teaching to kill large prey.

At 12-18 months of age young leopards are generally independent of their mother. The time that they disperse and become independent can depend upon their sex. Observers of leopards in the Serengeti recorded young males and females remaining in their mother’s range until they were 2-3 years old.

In general males tend to become independent at an earlier age than their sisters. There is a tendency for daughters to settle near their mother sometimes taking part of their mother’s range as their own. It is not clear how far newly independent leopards travel to set up their own home range but a male leopard disbursed from his natal range at 14 months of age and was seen 30 km from it. Sometimes they return to their natal range and then go back to their own. Sub-adults have a higher mortality rate than resident adult leopards.

A leopard cub’s life is very fragile. There was a story and video (now deleted) of a cub who found its way into a village in Kashmir. Perhaps it had come down from the snow-covered hills for food. Perhaps its mother had died. The villagers were both fascinated and initially frightened (prodding the poor thing with a stick!). This occurred in the Jammu and Kashmir on March 6th 2008. The people of this village rescued the leopard cub from the vicinity of Bhadarwah village in India’s northern Jammu and Kashmir state. Officials said that the cub could have strayed after heavy snowfall as the Himalayan state had heavy snowfall in 2008 making survival harder.

The experts are not, it seems, certain as to the number of leopard subspecies. But this would appear to be the current list (10):

The leopard is classified as near threatened (NR) by IUCN Red List (see IUCN Red List for cats). This fragile situation is due to habitat loss, fragmented habitat (in India, Indochina, Pakistan, Malaysia, and China) and poaching (driven by traffic in body parts). The leopard now mainly lives in sub-Saharan Africa.

Caring for cubs in captivity is obviously skilled work. Here is a summary of what was successfully carried out in relation to two snow leopard cubs in China:

If, rarely, a leopard becomes a man eater it is essentially our fault.