“In the wild and in captivity, most young are born in May and June, following a gestation period of 94 to 103 days.”

The verbatim quote is from Mel and Fiona Sunquist’s premier book on the wild cat species, Wild Cats Of The World. The Sunquists refer to the international snow leopard studbook. The work of L. Blomqvist and I. Sten – Reproductive biology of the snow leopard Panthera oncia was published in the International pedigree book of snow leopards 3 at pages 71-79 in 1982. 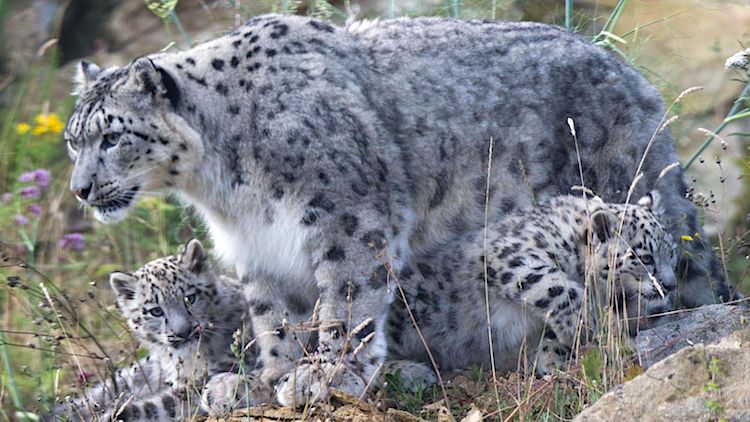 Beautiful female snow leopard and her cubs. Picture in the public domain.

Blomqvist and Sten ‘calculated that 58 percent of gestations lasted 94 to 98 days, and of these, 19 percent were 97 days’.

Some information about the newborn cubs

In the wild cubs are born in secluded places such as a cave or rock crevice. The den is lined with the mother’s soft belly fur. V.G. Heptner and A.A. Sludskii in their work Mammals of the Soviet Union published in 1992 write that there is a record of snow leopard den in Szechwan lined with belly fur to a depth of 1.27 centimetres. Szechwan is a province of southwest China crossed by the Yangtze River.

Newborn cubs weigh between 320 grams to 567 grams (source: H. Hemmer in Uncia uncia. Mammalian species 20:1-5). They are blind and helpless but have a thick coat to protect them from the chill of their high natural world. At the age of seven days they open their eyes.

It is recorded that in captivity and in the wild the mother spends all her time during the cubs’ first week of life grooming and nursing them interspersed with periods of rest. The young put on weight rapidly at 300-500 grams a week during the first few weeks.