OVERVIEW: Felis chaus is the scientific name for the jungle cat; a small wild cat species that has a passing similarity in appearance to the Abyssinian purebred cat. The coat is plain tawny grey and ticked. Its color varies slightly. It is found from Turkey to Cambodia – a very wide distribution. Its name is misleading as this wild cat species prefers swamps and reed beds – next to water. It is also called the Chaus, “reed cat”, “swamp cat” or “swamp lynx”. Due to their wide range, they are also found in dry grasslands. The jungle cat feeds mainly on small mammals such as mice and rats. They leap to catch birds. This is a highly adaptable feline suited to all seasons and all habitats. It shuns dense rainforest and arid desert, two extremes of habitat. It is described as a “flexible, all-purpose cat” by Dr. Desmond Morris, the well-known zoologist which makes it more accepting of human alterations to their habitat. The jungle cat is long-legged and as a consequence fast-moving. They been timed at 23 km/h (I’d expect near 30 km/h typically). The jungle cat climbs well but is a ground dweller

Here is a video of a captive jungle cat looking anxious and stressed in my view. It looks like a private zoo environment. I don’t like to see it but it does show the appearance and size very well. Sometimes these videos disappear over time. If it does not work, I apologise but I don’t control its existence on the internet.

This individual jungle cat looks big. He looks like he weighs around 20-25 pounds.

♬ Who Let The Dogs Out – Original – The Doggies

Here is a screenshot from the above video:

From a distance there appears to be no markings on the coat but on closer inspection the coat reveals a few faint bands on the legs and tail. The ears are quite sharply pointed with long black hairs at their tips. These create small ear tufts. The tale is on the short-side.

The size of felis chaus is similar to that of the domestic cat weighing around 5 kg for females to around 10 kg for males (22 pounds). It is a little larger and lankier, however. A size comparison chart with other felids can been seen here: Wild Cat Species by Size. 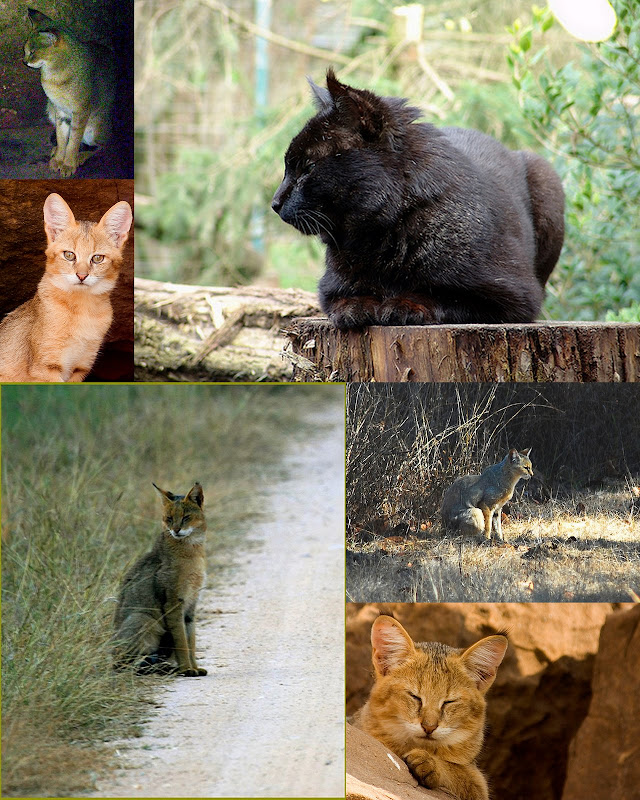 
The coat of felis chaus is plain. It is basically an unmarked tabby coat. Kittens have markings, either spots or stripes that fade at sexual maturity. If an adult retains markings, it is on the tail, hindlimbs and forehead. The muzzle is white. The colour of the coat is from tawny grey to a reddish, sandy colour as shown in the lower right photograph in the collage above but the undersides are lighter or white. They have dark hair tuffs at the end of their ears. The tail looks relatively insubstantial compared to many other wildcats such as the Andean cat or the clouded leopard and is more like that of the bobcat.

The face is relatively slim compared to the squarer faces of other wild cats. The ears are quite large (particularly the ears of the cat top left in the collage).

The black jungle cat in the collage is not that rare. Apparently, they occur frequently in south east Pakistan and they are also found in India. They are called “melanistic”. This is in reference to the pigment “melanin” that is in each individual hair.

The similarity to the domestic cat is not just skin deep — it has been established scientifically. There might be subspecies of the jungle cat as the distribution (range) of this cat is very wide but no research has been carried out to establish this.

Based on the IUCN Red List and modified from Wiki creator: Chermundy. This map is current at Dec. 2011. It is likely to shrink over time. Here is a map made by me that you can refine:

Felis chaus prefers riverine swamps, reed beds, tall grass, thick brush. It prefers not to be at high elevations and is found at elevations below 3,200 feet. It can adapt to desert and steppe (grassland without trees).

Felis chaus is a stealthy ground hunter. It can make high leaps to try and catch birds like the caracal and leaps onto rodents like the serval. It main prey is small mammals such as rats, mice, gerbils, squirrels, frogs. Birds are also an important prey item. Insects are also a source of food. Occasionally snakes are taken.

Young are normally born between December and June. Gestation is from 63-66 days. Dens are burrows, tree roots, hollow trees and hedges etc.. Litter size: 3-6 kittens. They eat solid food at 49 days and weaned at 102 days. At 6 months the are hunting.

The population is decreasing but it is classified as Least Concern LC.

In 2002 the Sunquists, in Wild Cats Of The World, described felis chaus as the commonest of the small wildcats. However, it population size may be overestimated. The rather generous classification of LC does not, it seems, square up with the general tenor of the appraisal of the survival of this wild cat by the Sunquists, which is described as being adaptable and flexible enough in both habitat and prey to “probably” ensure its survival. I would have thought a “probable” when added to a lack of substantial research and large declines in numbers in Asia and Europe would warrant Near Threatened. But the criteria are all their own.

Its adaptability translates to living in and around agricultural land (hence being more visible and its population being overestimated – perhaps). It would also seem to be in part the reason why it has been so heavily persecuted and exploited; trapped and killed, I mean for its pelt. Apparently, before export of skins was banned in 1979, there were over 300,000 in India.

So, the usual threats are in place: killing it for sale of body parts, habitat loss and/ fragmentation and in the destruction of habitat comes the destruction of this cat’s prey forcing it to seek alternatives such as poultry, which then puts the cat in conflict with farmers. It seems that large numbers where killed (perhaps still are) because of this state of affairs as it is considered a pest by some famers. This cat prefers swamp land despite its sightly misleading name and wetlands are gradually being eroded by human activity. Farmers could do more it seems to protect their livestock rather than simply killing the cat.

Despite this general level of exploitation, it is “considered” common in some parts of its geographic distribution, namely in India, Pakistan and India. In Asia it is less common due to being trapped and in Thailand and Laos where is was once common it is now rare.

Although only protection on paper, felis chaus is listed in CITES Appendix II. This means:

If you are involved in the cat fancy you will know that the wild cat hybrid, the Chausie, is a jungle cat/domestic (Abyssinian cat) cat mix. Apparently, the jungle cat itself is also a fairly popular domesticated cat in the USA. In fact, more people search for breeders of the jungle cat than they do for information to learn about this cat.