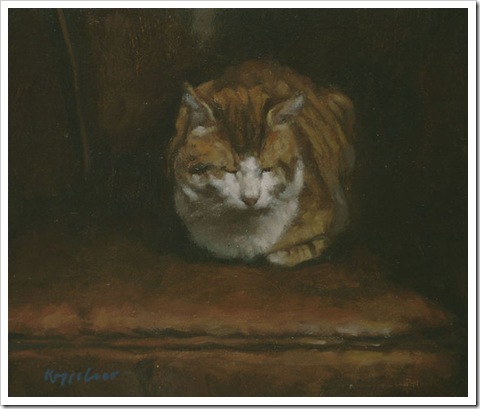 This is Frans Koppelaar’s painting Tom Cat. It was painted in 2005 and is an oil on canvas size 25 x 30 cm. Permission has been granted from Frans Koppelaar to use the picture under a Creative Commons Attribution 2.5 License.

So what do I know about Frans Koppelaar and this cat painting? On his website….yes, it is really refreshing to be able to visit the website of a living artist who talks to us. I thought for a minute when I researched this painter that he was, like so many others, dead! As I was saying, on his website Frans Koppelaar’s Tom Cat is listed under miscellaneous. Most of his paintings are landscapes, cityscapes and portraits. And you know what, I love his paintings. Even looking at them on the internet (smallish photographs of the original) I can sense and get involved in the subject that he has painted.

Now, I am going to stick my neck out and suggest that the substantial, orange and white tabby cat (see tabby and white cats

) that he painted is his cat companion. The cat has all the appearance of a moggie cat (mixed breed, non purebred cat), which I am pleased about and it is what I would expect of an artist, for some reason.

The cat was probably just doing his own thing, dozing off, half asleep in the studio and Mr Koppelaar decided to paint him. Tom cat means, male cat and sometimes a male cat that has not been neutered (sexually active).

For me, and this is just me (a person lacking in great knowledge about painting), he creates something special out of the relatively ordinary. He says this:

The pure excitement that comes forth of manipulating paint into visual illusions of the real world is my main drive behind my work.

He has been criticized as lacking innovation. Perhaps the people saying this lack the awareness of what art is or can be about. It can be very subtle. And as he implies, in attempting to innovative or original the resulting work can be poor and not art at all.

Frans Thomas Koppelaar was born on 23rd April 1943 in The Hague, Netherlands. He attended the Royal Academy of Visual Arts at The Hague between 1963 and 1969 and moved to Amsterdam in 1968. He says that he paints in the tradition of the Amsterdam Impressionists (src: Wikipedia)