Jaguar cubs are beautiful but you don’t expect to see a picture of one in the wild do you? The jaguar is pretty rare and elusive with an approximate world population of about 8,000 (2009) maximum, and a minimum of about half that (as can be seen we don’t really know the number, which is partly why I think the IUCN Red List of Threatened Species classification of Near Threatened (NT) is generous). I would go further and say this cat is Threatened (Vulnerable) if one compares the long term past with projections of the long term future.

This page, however deals with jaguar cubs; the reproduction and development of the jaguar. The jaguar is one of the four big cats that can roar 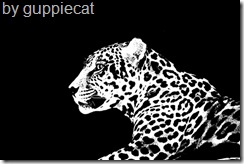 and roaring, it is thought, brings male and female together to mate. The female travels in search of a male mate and roars! Males then come around and accompany her on her travels.

Female jaguars stay in heat (sexually receptive – oestrus) for about 6-17 days and the period in between oestrous  is 22-65 days. The female becomes restless during oestrus and mating is quick and very frequent (up to 100 times a day!).

About the video above

The jaguar birth took place on New Years day 2009 (at 8:30 pm). The mother is Zassi who comes from Georgetown, Guyana (Guyana is a south American country – see map below) and the father is Tuco from Houston Zoo. The rarity of these events is highlighted by the fact that it is the first born at Jacksonville zoo since 1981. So quite a celebration (and some nervousness, I expect).

Zassi is a jaguar who was captured as a young animal and subsequently raised by people; thus making a return to the wild impossible and as a result she was loaned (with her brother who suffered the same fate) to Jacksonville zoo. Zassi went to a good home as the zoo has the largest number of jaguars in the USA (8).

Back to pregnancy…Pregnancy lasts for about 100 days and the litter size is 1-4 jaguar cubs. When newly born, jaguar cubs weigh between 700 and 800 grams (about 1.5 lbs). They are born with their eyes closed and they stay that way until between 3-13 days of age. The teeth start to show at about one month of age. Initially, jaguar cubs bleat then gurgle followed by the meow at between 3-6 months of age and finally almost the full range of sounds at one year of age. Males grow faster than females and after one year are about 25% bigger. 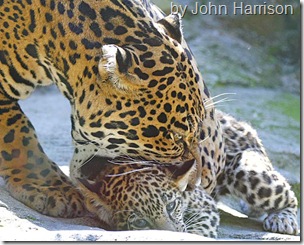 Jaguar cubs disperse to their own range when they become adult. There is little data on when this takes place (which I find surprising).

However it would seem to vary between 20 months in the Pantanal, Brazil (for a male and female) and 16-18 months (for two males) in Iguacu National Park, Brazil. There is a large difference in the dispersal behaviour of females and males (which, I have to say, somewhat mimics the dispersal habits of people!).

Whereas females might disperse and come back to the “natal area” before finally leaving for good to a home range closer to home than for males; males would leave for good and go three times further away from “home” (the natal range) than females. There are two sad stories in the fine book, Wild Cats of the World, in which two males entirely independent of each other ended up being shot by poachers while searching for a home range or having just settled down (page 512).

A jaguar cub’s growth to independence and desire to leave “home” is not linked to sexual maturity, which occurs after dispersal. Females becoming sexually mature at 2-2.5 years of age and males later at 3-4 years of age. 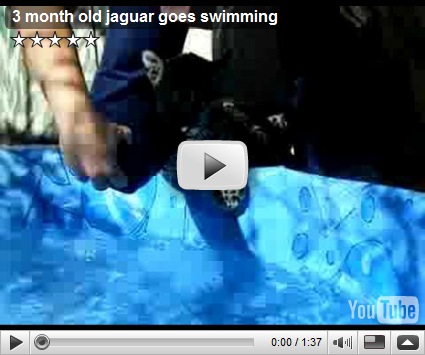 Jaguars do fish and turtles are part of their diet. They have a fishing technique and like water so the video above shows natural behaviour albeit it in unnatural surroundings – see Jaguar Ecology and Behaviour.