In the UK an ever increasing number of cats and dogs are being given antidepressants because they are being left alone for hours at a time by their owners. 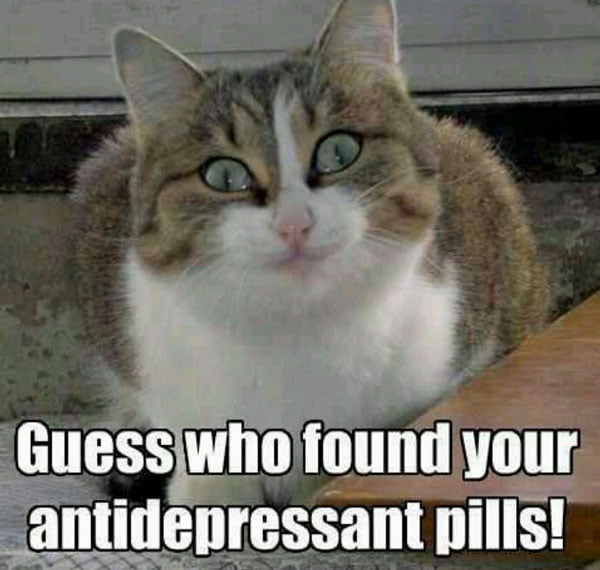 This information comes from veterinarians. They said that it was becoming increasingly common for owners to administer drugs to their cats and dogs to treat separation anxiety, excessive noise and aggressive/destructive behavior.

The People’s Dispensary for Sick Animals (PDSA) found that more than 25 percent of dog owners in the UK left their pet alone for at least five hours during weekdays. In addition, 250,000 dogs never went for a walk with their owner.

The fear is that too many pets are living isolated lives which could lead to serious problems.

Vets are prescribing drugs such as Clomipramine and Selegiline both of which treat aggression and anxiety. Clomipramine was created for humans to treat: depression, phobias and obsessions and ‘cataplexy’ (sudden loss of muscle control perhaps triggered by anger). I don’t see this drug as suitable for a lonely dog. As for Selegiline, this is for humans who have Parkinson’s disease. It helps to control it. How is this suitable for cats and dogs?

Perhaps I am being naive but this all seems very wrong to me. The answer is not to sedate and zombify our cats and dogs because they are forced to live in an unsuitable environment created by people. This is starting off with a human-created bad situation and then compounding the problem with bad treatment.

The common sense answer is to remove the cause of the so called behavior problem, which on the face of it looks easy: spend more time with your cat or dog and if you can’t find someone who can.

I believe that this snippet of UK cat and dog news is a case of the UK following the USA. That may be unfair but until I read this news I felt that mood enhancing drugs were used more often in the US than in the UK but if I was correct, the UK appears to catching up. They say the UK follows the USA. This may be an example.