This page was originally written in 2009. I decided to add some fresh black cat pictures. The segment that was written in 2009 is below. People like to see black cat pictures which is interesting because there is still a healthy level of superstition about black cats. Perhaps people like to look photographs of black cats but are not so keen to own them. Of course back cats are as beautiful as any other cat and it is said that they are more healthy because there appears to be a link between the gene which makes the cat black and health. There is one black cat which is purebred: the Bombay. The photographs below come from Pinterest. Pinterest is entirely built upon breach of copyright and therefore I feel liberated to publish the photographs here.

The sentiments expressed are the same as mine.

Yes, people search for “black cats pictures”. What people are actually looking for are pictures of black cats. And that is interesting as black cats are the least popular cat in terms of coat type. You might want to see an authority for that. Well I am referring to an article in Press Publications2 entitled: “Black cats less likely to be adopted at shelters“. The black cat is still associated with piles of superstition (see cat superstitions and Black Cats ). Depending on your preferences black cats are either good luck or bad luck or something in between. In the USA it is considered unlucky to cross the path of a black cat. The article says that many shelters (in the USA) ban the release of black cats for adoption during Halloween in case they are adopted for the wrong reasons (as you know black cats are linked to witchcraft). It seems that people choose cats partly on its colour, which is unsurprising as a cat’s appearance is a major, if not the most important, factor in choosing a cat purebred or not. 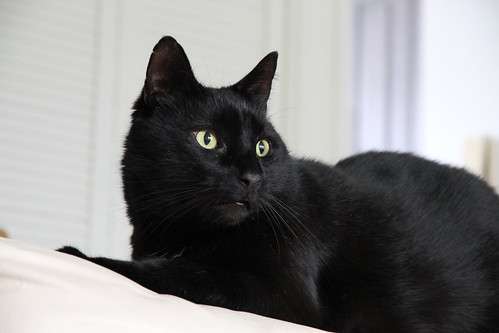 Some rescue centers, I am told, euthanise black cats on their arrival at the center because the chance of re-homing is very slim. They are considered unattractive by many people. Clearly some people have different ideas in searching for “black cats pictures”. And they may be pleased to hear that there is some evidence that suggests that black cats are more healthy. The gene that causes melanism (the black pigment is called melanin) may be able to help protect cats from infection from virus and bacteria1. See also black cat coats

Well, three pictures on this page of a black cat are mine, which is very self indulgent but that is what I want to be when it comes to showing of Charlie. The handsome boy above is my three legged cat, Charlie, and he is good luck to me as he loves me and I love him. Simple. I also love my other cat a black and white girl. Black cats only bring the luck that you bring to the relationship.

I have just taken this photo, below (2009). It was made as I worked on this page about “black cats pictures”. It is great to have a black cat a foot away while you work on a post about black cats! 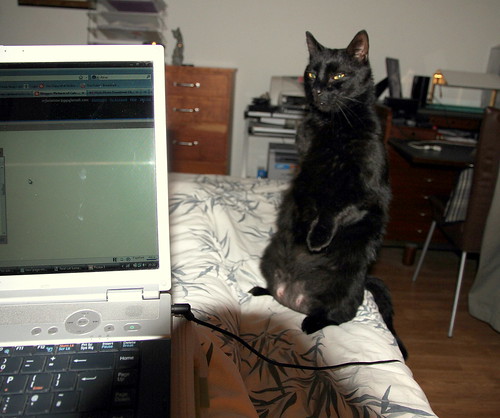 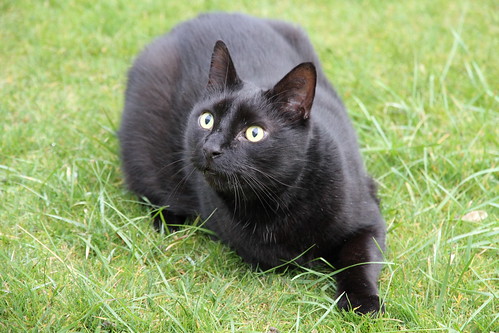 Now, both the black cat pictures on this page that were taken without flash light (the one immediately above and the one heading the page) were taken in very subdued light bordering on twilight, which might surprise you. But the answer lies in the camera really. If the camera, a digital camera, has a sensitive sensor then it can produce good quality images in low light conditions without too much “noise”. Noise in this instance means “grain” in the terminology of film photography days. There is no doubt that photographically speaking we are “light challenged” in England compared to the west coast of the USA, for example.

MAR’s pictures are protected by copyright – please respect it. Here is a link to his Flickr photostream