The Florida bobcat (Lynx rufus floridanus) doesn’t exist. That is what the major authorities on the world’s wild cats say. I am referring to:

Both of these sources make no mention of the Florida bobcat. The Red List would have listed it as a subspecies if it was one as they always refer to the latest research into taxonomy (the classification of species)…. 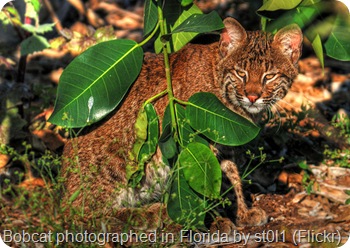 …Recently, classifications have been modified or upgraded through DNA analysis whereas in the past it was assessed through observation of physical characteristics and behaviour etc.

One source that argues that there is such a species is the University of Florida IFAS Extension (edis.ifas.ufl.edu/UW201). They say it is a “distinct subspecies” and refer to the Florida Puma as another example. Yet it is doubtful that the Florida Puma is a subspecies as the physical differences are said to be due to inbreeding because of a very small isolated population. Of course, people in Florida would like to have their very own wild animal. What is ironic is that the wild cats in Florida cannot be said to be that well treated due to huge pressures on their habitat as a result of human population growth and activity (property developments). Although it is not clear, the university’s sources for their assertion possibly came from either or both of these sources:

Perhaps the major source of information on the so called Florida bobcat is Wikipedia® (en.wikipedia.org/wiki/Bobcat). Despite what some people say Wikipedia is a reliable, high quality source because they have careful rules and they always reference sources. Wikipedia lists out 12 subspecies of bobcat one of which is the Florida bobcat.

The Wikipedia authors do not, however, support this contention with a reference. So there is no source for this statement it seems – strange. They do say that:

The subspecies division has been challenged, given a lack of clear geographic breaks in the Bobcat range and the minor differences between subspecies.

The source for this statement is a 2004 CITES convention. It is probable that the older books on the bobcat divided it up into 12 subspecies. But the science of taxonomy has become more accurate and is going through a period of change due to DNA testing as mentioned.

Modern science therefore supports the argument that there is no such animal as the Florida bobcat. It is the bobcat (Lynx rufus) no more or less. However, weight and physical characteristics of the bobcat does vary from region to region but this is typical of a number of wild cats especially those that have wide ranges (distribution) that cover differing landscapes and climates. These differences do not (at present) qualify these cats to be called different species, however.

Bobcats that occupy the more northern latitudes are usually larger than those found in the south (
for example in Florida). An example would be adult male bobcats in Oklahoma weighing on average 8.9 kg and those in Minnesota weighing 13 kg, a substantial difference.

I am reluctant to change the Wikipedia entry in case I have missed something. If someone knows better please say so in a comment below! Thanks.