The cat has two sets of teeth during its lifetime. Twenty-six deciduous teeth (baby or milk) begin to “erupt” at about 21 days of age1. With rare exceptions kittens are born without teeth4. They are fully grown by 5 to 6 weeks of age and the different types of teeth erupt at different times allowing age to be determined4(see below). At 4 months of age the thirty permanent teeth begin to show. These are complete by about 6 months of age. Cat teeth follow the general pattern that is found in most carnivores. A cat’s teeth tear flesh like serrated blades. A wild cat’s teeth are cleaned as they scrape over the bones of prey.

The picture below shows these teeth and the chart immediately below shows the number on the upper and lower jaws. When the jaw is closed the canine teeth interlock and the lower incisors rest just in front of the upper incisors. The molars are behind the incisors and premolars. The small incisors are for holding and nibbling. The canines are for stabbing and killing (breaking the vertebrae of prey).

The last upper molar on the top jaw and the lower molar together makes up the “carnassial teeth” (the large teeth found in many carnivorous mammals, used for shearing flesh and bone in a scissor or shear-like way5). These provide the shearing action that cuts food into pieces before swallowing. You can see your cat use these when he or she has to cut up a particularly tough piece of food. There are relatively few molars1. 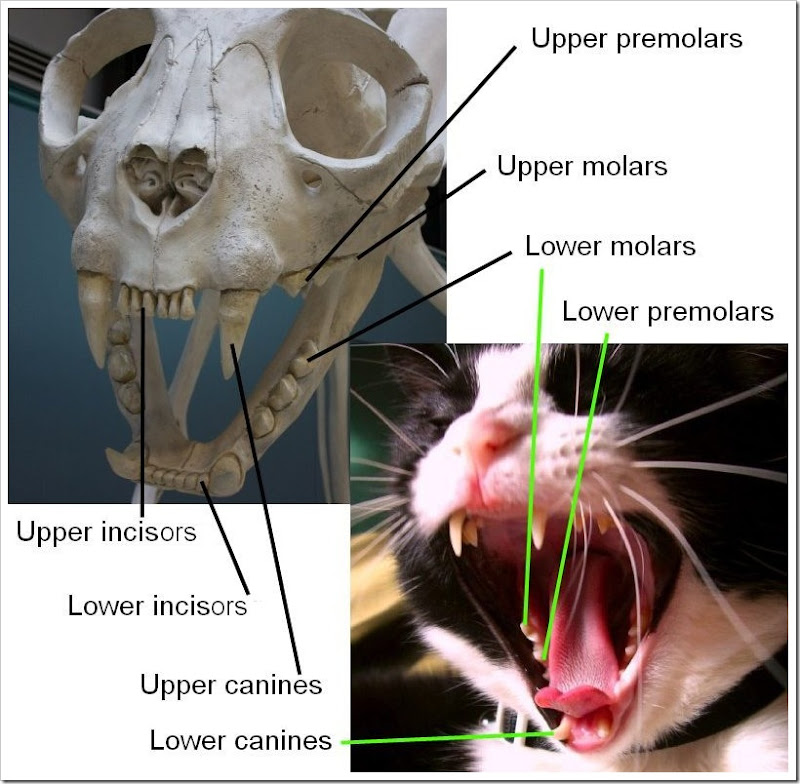 Montage above: photos above by Jeremy Burgin (skelton) and thian_un (live cat). Both published under a creative commons license. Montage by MikeB.

Cat teeth can be chipped and broken or lost in fights with other cats. Dental problems in domestic cats are sometimes due to diet4. In fact, it is believed that dental and periodontal (gum) health is important to the rest of the body as bacteria from infected gums can spread to other organs of the body in the blood stream6. It is wise for a cat keeper to inspect their cat’s teeth regularly to check for basic health issues and if possible, to train your cat to accept brushing of teeth6. Veterinary cleaning under anesthetic might be required. Cleaning teeth without anesthetic is considered impractical6. Placing a cat under a general anesthetic carries a risk of injury or rarely death (1 in 100 or 1 in a 1,000 – ask you vet before requesting this procedure). See also:

There may be some soreness during teething4. This may affect apparent appetite. Sometimes baby teeth are “retained”. Usually, baby teeth are reabsorbed when the permanent teeth replace them. If not, then the permanent teeth are pushed out of alignment when they erupt causing a bad bite. When that happens the baby tooth that remains should be pulled out4. Sometimes cats have an abnormal number of teeth. If there are too few there are no health issues. If too many it may cause overlap and twisting of teeth requiring extraction. Incorrect bite: mostly inherited due to jaw growth or retained baby teeth. Overshot bite means that the upper jaw is longer than the lower. The undershot bite is the opposite. There is a third cause of incorrect bite: wry mouth caused by one side of the jaw growing faster than the other. The flat faced Persians (“ultra” Persian) tend to have more incorrect bites than other purebred cats.