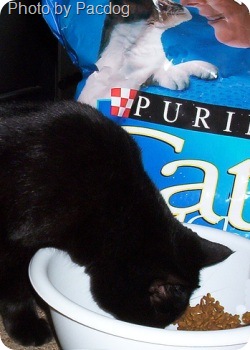 6th Oct 2009 – Get $100 for telling me where you can get a Purina Cat Food Coupon! First though, I don’t want to spoil things but I think we should all know that to the best of my knowledge Purina is involved in animal testing. That may not bother lots of people. Some it might, in which case don’t bother with cat food coupons from Purina.

Note: the well known Give a Bowl promotion that provided a $4 coupon and which gave to charity at the same time is closed, the target having been met.

So what is left? Not much! This page mostly relates to the USA by the way – they like their coupons….This post has turned into a diary of a search for Purina coupons! To be brutally honest it is pretty much a fruitless search. Coupons obviously come up from time to time but at this time  there are plenty of sites waffling around the subject (as I am) but not producing tangible, precious coupons.

The best thing is to keep an eye on the Purina® discount page and/or do what they want, which is to join one of their “community” forums etc. You will probably be able to keep tabs on upcoming discount programs and coupons better that way.

Update: I will assume that these free Purina cat food coupons advertised on Craigslist have gone. However, Craigslist does throw up the occasional bundle of coupons. Worth doing a quick search I’d say.

Update: I have searched for 2 hours without success…..

So, this is what I’ll do. The first visitor to leave a comment (see link below) in which he or she can leave two things:

I will send them $100 or the sterling equivalent, which is much better than a few measly coupons.