Introduction – overview – summary: The rusty-spotted cat is the world’s smallest feline, domestic or wild. They look somewhat like a domestic cat and there is an interest in adopting one as a companion but please don’t (please click this link to read about). It has been described as the “hummingbird of the cat family” which is an apt description because it is about half the size of a domestic cat, extremely agile and active. The “rusty” reference in the name comes from the grey fur tinged with a rufous colour. The distribution appears to have expanded north over recent years according to the Red List as at one time they were confined to Sri Lanka and mid-southern area of India. They like to live in moist and dry deciduous forest, tropical thorn forest and scrub forest and also grasslands or scrubland. You will also see them on rocky areas and hill slopes.

Often you see them in “teak, bamboo, grassy areas and dry thorny vegetation” according to Wild Cats of the World. They mainly eat small mammals, birds, lizards, frogs and insects. They are known to kill the occasional domestic chicken and ducks when the opportunity arises and have a tremendous appetite. In captivity a rusty spotted-cat weighing 5 pounds ate 4-6 ounces of meat mixture and a dead mouse or chick every day according to P. Callaghan in 1991 in his document ‘Cat Tales: Newsletter of the International Society of Endangered Cats’.

Rusty-spotted cat size compared to a domestic cat size. Image: MikeB based on images in the public domain.

RELATED: Great picture of a rusty-spotted cat and 13 facts

Conservation is the most pressing of issues for all the wild cats. In 2002 the Cat Survival Trust website, which was last updated in June 2002, says that this cat was not considered to be threatened by the IUCN Red List of Threatened Species™ (Red List). This would make the classification at that time, NT (Not Threatened). Today, at June 2009, the Red List classifies this wild cat as Vulnerable (VU). This is one more stage towards extinction. I discuss this further below. Update: as at May 15, 2022, the conservation status is described as Near Threatened. So, the position is stable, according to experts.

RELATED: What does the rusty-spotted cat eat?

See Rusty-spotted cat description. The scientific name is: Prionailurus rubiginosus. It would seem that the most noticeable feature of this wildcat is its diminutive size. It is one of the two smallest of the wildcats, the other being the Black-footed Cat. Their weight is similar to that of a domestic miniature cat. These are the vital statistics and some interesting comparisons:

The coat is the usual heavily ticked, tabby coat with very rusty markings. The best-known domestic cat with a ticked coat is the Abyssinian cat. As can be seen, the coat has a ground colour of grey with rust-coloured spots and markings over the body and face with a white underbelly. The eyes are very large and round. The large size must have evolved for survival as a nocturnal and arboreal cat. This means the cat is active at night and spends a lot of time in the forest trees.

As mentioned, the classification is Near Threatened at 2022.

The reason for this classification is as follows: the population is decreasing. They don’t know the number of mature individuals but the population is not severely fragmented. A major threat is habitat loss as usual due to extended farming enterprises which is a serious problem for wildlife in South Asia. Prime habitat for this cat represents about 1/4 of its distribution. 75% of its current habitat may be converted for human use: urban developments, industrial developments et cetera. The rusty-spotted cat lives in human-dominated areas where there is change to the landscape. 90% of its population is in India with the remaining 10% in Sri Lanka.

The most recent distribution map is below (Red List 2022):

Below are some earlier maps which I don’t want to remove because they are of historical interest I believe. You can see that they have decided to expand the distribution of this cat. We don’t know why. It may be just that they have more information and therefore the assessment is better rather than the fact that the species has expanded into new areas.

The Rusted-spotted Cats range in (2009) indicated below in the map (but see the map lower down): 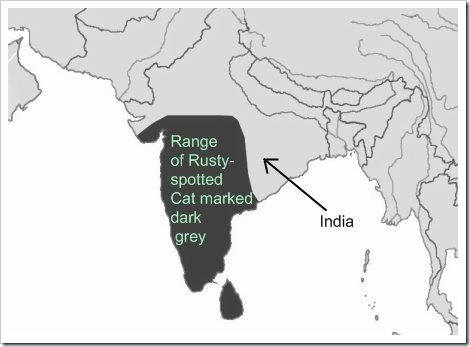 The map above (modified by me) is published under Wikimedia® creative commons license = Attribution-ShareAlike License. User: MichaelFrey. The map above is slightly different from the one below that I made up from information from the Red List website using a free blank map from the About.com website: 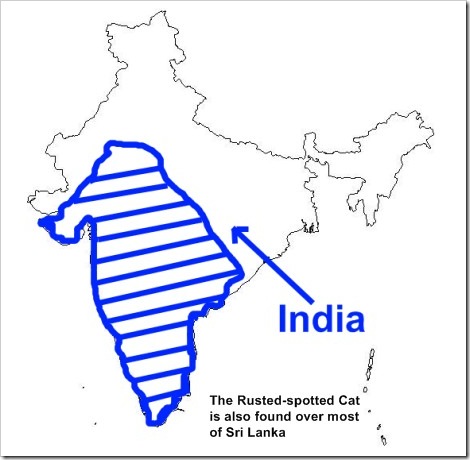 In this more recent assessment of range, it is larger in the north and the boundary in the north is not a straight line. This would seem to be due to research in 2002 and beyond, which

Also, the range in Sri Lanka does not completely cover the country as in the older map. There is an area in the west where the Rusty-spotted Cat is not found according to the Red List – see map.

As at 2022 is found in the following areas: India (Uttar Pradesh, Tamil Nadu, Rajasthan, Uttaranchal, Andhra Pradesh, Gujarat, Jammu-Kashmir, Karnataka, Kerala, Madhya Pradesh, Maharashtra, Orissa); Nepal; Sri Lanka. Please note that the date of the assessment is April 20, 2014. The Red List is sadly consistently out of date but this is the best information that we have.

What does the Indian landscape look like? Here is a fine photograph, which gives a feel for it and more: 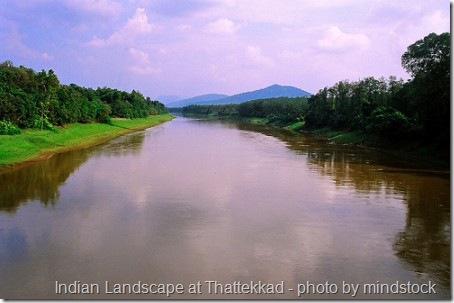 Some more on the preferred habitat

Some more on threats and conservation

There are two levels of listings under CITES:

Rusty-spotted cat loved by the public but failed by conservationists

If you want to know how many rusty-spotted cats there are in the world today, 2022, you won't get an ...
Read More

Is it legal to own a rusty-spotted cat?

The thought of owing a rusty-spotted cat is quite popular judging by the Google searches: UK The answer depends on ...
Read More

There is a fascination with the rusty-spotted cat because of its diminutive size. It is the smallest cat species in ...
Read More

How small is the rusty-spotted cat?

The rusty-spotted cat is known as the world's smallest wild cat species. I believe that we must say it is ...
Read More

Great picture of a rusty-spotted cat and 13 facts

This is a really excellent picture of a rusty-spotted cat, which is the world's smallest cat either wild or domestic ...
Read More

This is an unusual, short video of a rusty-spotted cat in what appears to be a photographic studio. This species ...
Read More

Can you domesticate a rusty-spotted cat?

Yes, you can domesticate the rusty-spotted cat to a certain extent or you can tame it according to two naturalists ...
Read More

What does the rusty-spotted cat eat?

The rusty-spotted cat is the world's smallest cat and certainly the smallest wild cat. It is very cute looking but ...
Read More

The range (distribution) of this very small wild cat is mapped out below. This is an emebedded map. The original ...
Read More