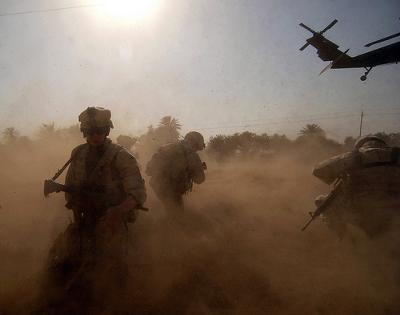 I’ve recently read several articles describing a dogs life on military bases in Iraq. Iraq soldiers and military leaders from different countries have an extremely negative opinion concerning dogs on base. In many areas the dogs are ordered shot or euthanized on sight.

Laws are being made to punish servicemen who abandon pets. Most often the abuse occurs by the serviceman returning home and leaving their “pet” abandoned and uncared for. Dogs have even been discovered alone and starved to death in apartments in Baghdad where their people have deserted them.

My story doesn’t involve these men. I want to talk about good men and women serving our country in Iraq who are losing their ‘pets’ to both Iraq and U.S. laws banning animals on base. The fight to reunite with their furry friends when they return to the states is heartbreaking.

In 2000 the U.S. Central Command created an order called GO-1A. This is a group of regulations that states the belief that animals around troops are a negative force and affect discipline among troops. However, most troops already know that the presence of an animal companion, be in dog or cat, creates a positive atmosphere.

American soldiers stationed in Iraq in early 2005 protested the new laws passed by the Pentagon by contacting the Humane Society of the United States. HSUA Ceo/President Wayne Pacelle sent a letter to the U.S. Secretary of Defense Donald Rumsfeld asking the GO-1A order be rescinded. The order to shoot/euthanize an animal on contact was creating a negative impact on troops who not only “adopt” a wartime pet but also hope to take the pet home.

There are also groups (especially military) outraged that American soldiers would break military law for an animal. Most know of someone punished either monetarily or by a loss in rank. As with everything else in life there are pros and cons and people on each side of the issue.

My focus in this article is on the love of the feral cats by American soldiers stationed in Iraq. I think it’s wonderful how many cats (and dogs)are being rescued and either sent to a safer place or to join the soldier when he/she returns home.

I come from a military family and know a few men serving in Iraq. I always wondered what they do to break the monotony of war. Is it like the show M.A.S.H. made popular on American TV? In my research on this article I’ve learned reality is a long way from the TV show.

Let’s look at down time in Iraq from a soldiers viewpoint. Troops are already banned from alcohol in countries that frown upon its use. I’m not sure if Iraq is one of these or not. There are also serious repercussions for entering religious establishments except under special order, expressing religious views, card playing, drug use and pornography. All of this can be verified on the internet. I’m not saying the above are done or not done but to add NO CATS to this list is a tragedy. Many of these soldiers had animals at home whom they miss terribly. Caring for strays gives the troops a little piece of home in a foreign land.

In the Iraq of this decade there are dozens of cats living on base. It is believed that Saddam Hussein had over 100 personal cats who were abandoned at the beginning of the occupation of troops. Many of these cats have eventually found their way to American bases in Iraq. Their lineage dates back to the cats who lived along the Tigress and Euphrates Rivers who were the first of all domestic cats. This lineage began over 10,000 years ago.

These Baghdad feral cats are remarkable on handling the sounds of gunfire and suicide bombings. Soldiers state that the first loud noise will send the cats scurrying for cover in bushes and trees. After that first explosion, they just go on about their business of being a feral and ignore the loud noises.

To those who argue the cats are worse off when the soldier goes home, there is the belief the cat would not have survived at all without the intervention of these caring American soldiers.

John F. Burns of The New York Times has written an excellent article on his time spent with the ferals and American troops in Iraq. It can be found at What Cats Know About War

What would seem like a fairly simple task of putting the cats on a plane and shipping them to safety is actually a dangerous and time consuming journey. First there is the 12 mile distance from Baghdad to the airport where they will be smuggled out. Iraqi police set up checkpoints and have orders to destroy any suspicious packages. Next the airline personnel must be persuaded to smuggle the cat out of the country. The lucky ones end up on a plane taking that first step to a forever home

There are several groups and countless individuals we cat lovers need to thank for their assistance in saving the lives of these poor cats. Here are some of the agencies.

One of the best success rates belongs to Baghdad International Rescue

which began as a cat rescue and is now saving both cats and dogs. ASPCA, Humane Society of the United States and Operation Baghdad Pups (and cats) are others. M.A.R.S. Safe Haven is sponsoring a petition to allow soldiers to be able to adopt an animal they befriended on active duty. This operation is called No Buddy Left Behind and is an effort to rescind the GO-1A law. All of these groups are easily found through your computer search engine. If I’ve omitted a group you have my apology. 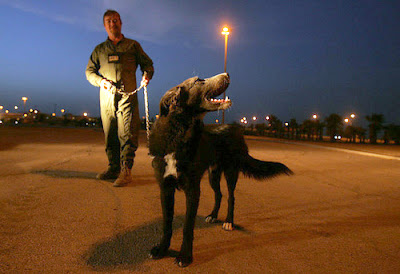 Operation Baghdad Pups (and cats) is now famous for the retrieval of Ratchet, a puppy Army Sgt. Gwen Beberg of Minnesota, USA fell in love with while stationed in Baghdad after rescuing him from a burning trash pile. Gwen’s fight to rescue her dog, whom she says was her strength during her duty in Iraq, drew international attention and generated a petition signed by almost 70,000.

In this case the American military gave permission for the dog to leave the country, but the military refused to transport. Fortunately the SPCA, which runs Operation Baghdad Pups arranged the transfer. Each animal rescue can cost between $3000-$5000.

Once this takes place there is a 6 month quarantine to ensure the health of the animal. Great Britain and other countries operate under these guidelines and their clinics are run by caring individuals and licensed vets who examine the animals daily. Family members are allowed to visit their future pet and should expect strict rules. While they are permitted to pet and feed their own animal they are banned from all others. This ensures there is no cross contamination. Should an animal prove unfit during the quarantine period it is returned to its country of origin.

Skeptics may ask “why not adopt an animal at home?” My personal answer for this is simple. These cats (and dogs) are providing a much needed service for the deployed military. I would imagine Sgt. Beberg would agree no other animal could replace her love for Ratchet. You simply cannot trade out one animal to replace another once it makes its way into your heart and your life.

I personally think allowing an animal to be placed in a forever home should take priority over bureaucratic red tape. Our service men and women have suffered enough. Let them have a little joy in the form of a cat or dog to ease them back into American life. Don’t we at l east owe them that much for serving our country?