I love it when different species of animal get on really well. And I am talking about species of animal rather than the human animal. It is a glimpse of how it could be for us in getting along with people of other nations and beliefs!

There are a lot of dog and cat images on the internet. There are many examples of dogs getting on famously with cats. This is because they are both socialised to get on with each other. If a kitten between the ages of 2 – 7 weeks is socialised with a dog and the dog is already socialised or in the process of being socialised the two individuals will get along all their lives and benefit one another. Maybe we can learn from that….!

Here is a really nice example of a cat and rat socialised to be best buddies. The photograph is by the great Helmi Flick, probably the world’s best cat photographer…and rat photographer! 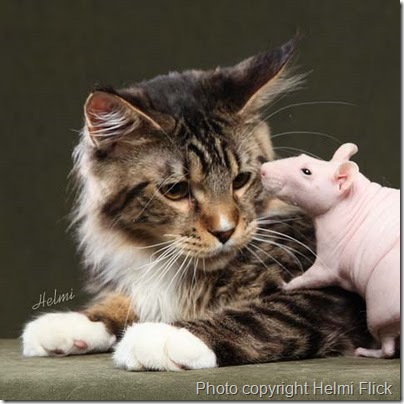 The cat, by the way is called Lewis, a Maine Coon and the almost hairless rat is Squelch. Fleur is their human companion, the person who brought them to Helmi and Ken for the photo shoot.

During cat photograph sessions it is Ken who “wrangles” the cat. This means getting them into the correct position for the photograph. A cat “tease” is the preferred method. A tease is a stick with an attractive object (to the cat) on the end. It takes a bit of skill to use one. Helmi says that Squelch, the rat, totally disregarded Ken and his tease. Ken Flick has a beard by the way.

Some time ago Helmi said I could, when necessary, mark up her pictures, loathe that I am to do it usually as they are so good. This is a chance staring me in the face to add a caption. Here goes: 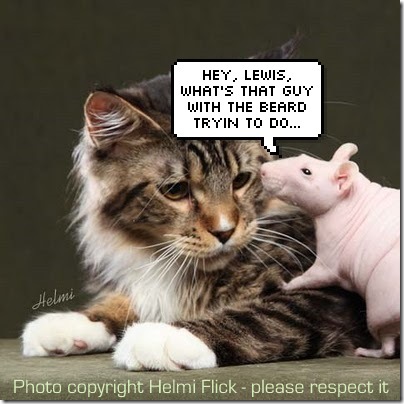 Now here’s the deal. If anyone has a PayPal account and is crazy enough to try, they can add their own caption in a comment and the best one gets a prize…yes a prize.. of $50 or currency equivalent.

Finally, if Helmi sees the above image and accepts it, even likes it you can down load it by right clicking, Save Image and then upload to your blog.

The caption was made using this website: http://wigflip.com/saywhat/…so you can try and do better if you like.

Well Finn did it again…. He took some money off me last time I ran a min-competition and he seems to have done it again with this caption: 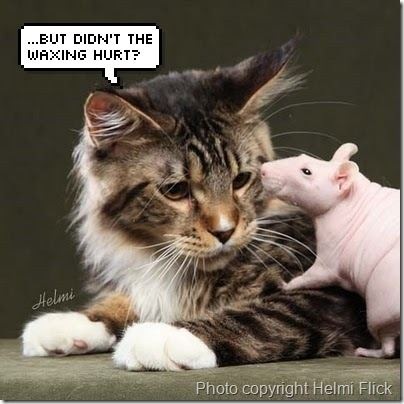 I love it. Made me laugh. Thanks Finn for taking the time.

Helmi Flick very kindly had a go too. Here is her caption (
for those who are unsure “diplatory” refers to a preparation that removes hair)…. 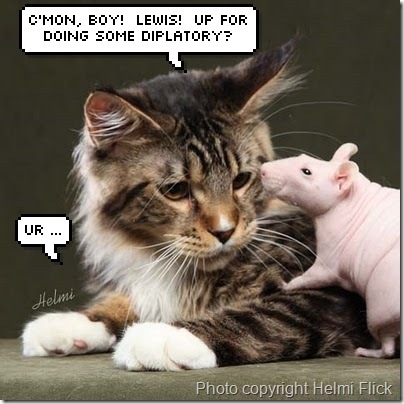 Phil Bamford has kindly made two captions and I am very impressed with them. Here they are:

From Cat and Rat contest to Home page