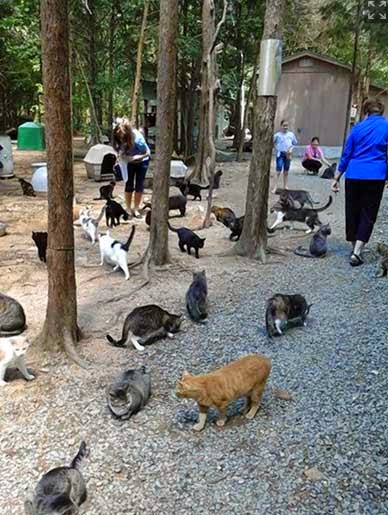 Michael recently wrote an article about a cat sanctuary, operating for more than seven years now, which is facing possible closure (this opens a new page so you can read it side-by-side).The sanctuary is well established having been on site for 7 years and low and behold a shooting range starts up next door creating masses of gunshot noise, the sort cats hate. I sure it makes life near impossible for the cats and caretakers alike A lot of Americans object to the sound of gunshots. It isn’t just about how this noise adversely affects cats generally including cats at a sanctuary.

Michael raised the question of whether the cat sanctuary can do anything to protest about the shooting range’s planning application. Perhaps they can, not that it will do any good. This will be a longer than usual article, and references will be listed at the bottom.

In an online article the writer (a shooter) states:

A bit of advice: If you don’t like the sound of guns, don’t buy a home near a gun range

Fine, but what about the situation described in Michael’s article where the shooting range moves into a place which is unsuitable and which disturbs the lives of cats and caretakers? Shooting ranges pollute the environment:

There are a lot of regulations involved in opening a shooting range. We’ll only go into outdoor ranges, since this is most likely the type this cat sanctuary is dealing with. You can’t just decide to start up a shooting range, buy a few guns and start advertising for business. There are many regulations that must be followed by the business owner. Sources that offer help are the:

Let’s break what’s required down into four groups. Legal, Facility, Fiscal and Social regulations. It would take a lot of effort and time to investigate a gun range hoping to find violations to any ordinance. Any of those groups listed about may be of help to opposition, as well as the business owner.

This is the business plan of the shooting range. The hours it will operate, rules members must follow, length of membership, safety rules, and whether members can supply their own guns just to name a few.

These need to be put in writing at the time membership is applied for. It should let the member know what will and will not be tolerated, and what will happen if rules are broken. This is important, because fiscal regulations remind members this is a business, above all else. Member dues, what methods of payment are accepted, and what member ship covers should all be in the contract. Fiscal regulations compliment legal and facility regulations as far as explaining and following shooting range rules, as well as what will happen should a member violate his or her contract.

A proper gun range has social rules on everything from whether guests may be allowed on the premises to whether protective ear and eye protection is required. Cleaning of weapons and where this must be done should also be addressed.

So how can a shooting range be stopped or closed down are two separate issues, and both involve the following of whether a shooting range owner is breaking any of the above regulations or violating city or county ordinance.

This is the trickiest of all, as most people don’t want a shooting range, especially an outdoor one, in their neighborhood. Property values in the neighborhood will likely drop, and even gun enthusiasts likely don’t want to listen to gunfire for hours on end.

Unfortunately, most people are more talk than action. Petitions are started to prevent a shooting range from opening, but few people actually sign them. Some of the reasons given in trying to prevent the business from getting a foothold in a community involve

What opposing a gun range boils down to is the business owner’s right to open a potentially prosperous new business versus the neighborhood having the right to safely protect residents, especially children, as well as their property values.

Not many people are brave enough to face a city or county council, where they’re usually given a three to five minute limit to state their case.

Unfortunately, there’s no way to judge what a ruling in a particular case may be. I’m far from having knowledge involving so many government agencies. The research is online for those who wish to further this headache of a legal system in the United States. Good luck Michael. You’re the one with a legal background. Hopefully you can study some of these sources and come up with a loophole.

Comment from Michael: this is about planning laws in my opinion. A gun club cannot simply move into an area willy-nilly without permission because shooting ranges create an environmental problem through noise generation and lead pollution. My advice to the cat sanctuary is to check and challenge their planning application and if there was none, questions have to be asked.