Funny Cats Photos is a search term. People are looking for the classic photos of funny cats. And there was a time, perhaps it still exists, when funny cat photos were very popular. There are whole websites built around them and there are millions of videos on them. I used this search phrase in YouTube today 4th Jan 2010 and played the top video that the searched produced. Then I selected three photos from the video, more or less at random and created a screen shot and then a collage of the photos: 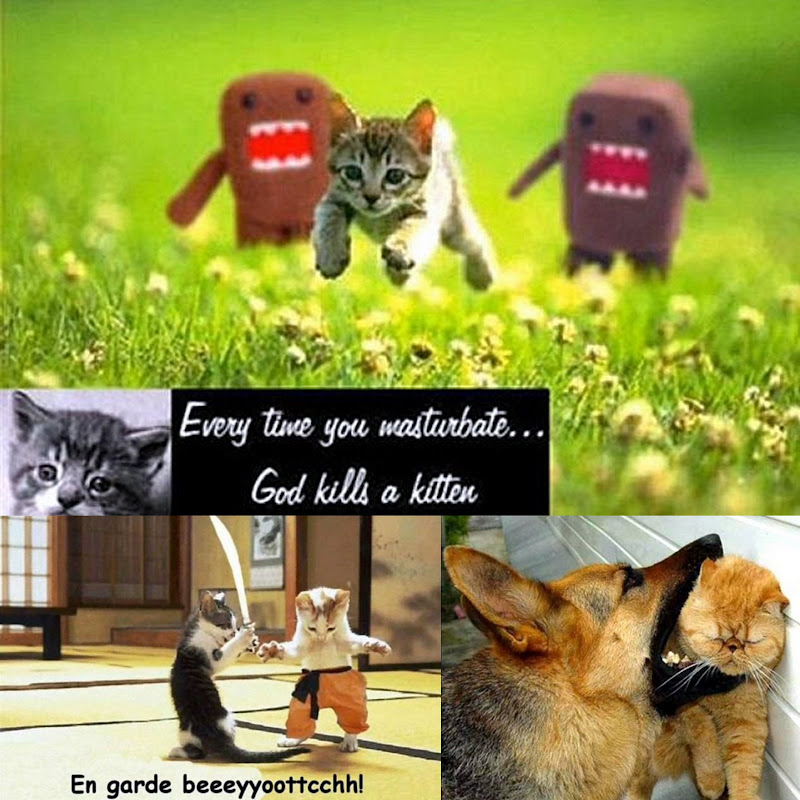 These are typical of this genre of photograph and it occurred to me that all three are depictions of violence. Maybe of no significance, I don't know. They are also not that funny to be honest and one is arguable blasphemous - disrespectful in that regard too. I believe that the fad will pass in time.

I am going to be the biggest pain in the backside and just ask (no more), whether the funny cat pic. is just a little sick. Or to put it another way, are they a little disrespectful of our cat companions?

And I know I am being horribly politically correct and a bit of a curmudgeon but I still think I am right to ask the question.

I actually like the funny cat pic to a point. A lot of them are cats in clothes. I am not a fan of cats in clothes. It is making fun out of cats for our amusement. OK, they are just cats aren't they? Yes, but what is "just a cat"? We are only now discovering that our concepts and prejudices about animals are out of date. They are often smarter than we think. The dolphin is one such animal. It is probably the second most intelligent animal in world after us (mind you I don't see much intelligence in the human race a lot of the time). There are calls to treat the dolphin on equal terms to us.

Now I like that. The world is moving a bit closer to the way I want it; where we see animals as equals sharing the planet. I don't think cats mind being in clothes except that it is a bit uncomfortable and cats don't feel humiliated by us laughing at them but (another but) it does seem to reinforce the wrong attitudes towards other animals generally and the domestic cat in particular.

The other classic funny cats photo is of a cat doing something normal from the cat's point of view but which we find funny or make funny by adding clever captions.

If we did that persistently to other humans someone would become upset. Can cats be upset? Yes, but not by that kind of thing. But I feel a bit uneasy about it. Or am I being over sensitive and silly?

I like to think that many people need to adjust their approach towards the cat and this is not a criticism. If we treat cats in the same way we are meant to treat other people there would be much less abuse of cats. There would be no declawing of cats. And the mentality that finds the funny cat picture funny is somewhat similar to the kind of mentality that says, "cats are only cats" (i.e. we can do as we please with the cat).

There is also an age divide in relation to funny cat photographs. I believe that it is mainly a young person thing. The majority of YouTubers are not young people (over half are in the age bracket 35 - 64 apparently) but it is young people who find the funny cat pic. funny.

It's a bit of casual fun and why not? Personally, though, I would prefer to see a more serious and respectful approach to the cat as it would benefit the cat and that is my overriding concern.