The title, ‘lost my cat-how to find it’ is a search term in Google (I’d use ‘him’ or ‘her’ and not ‘it’). This means people want to know how to find their cat. I thought I would refer to a telephone survey of owners who lost their cats which took place in 2007. It may help provide some ideas and success rates. 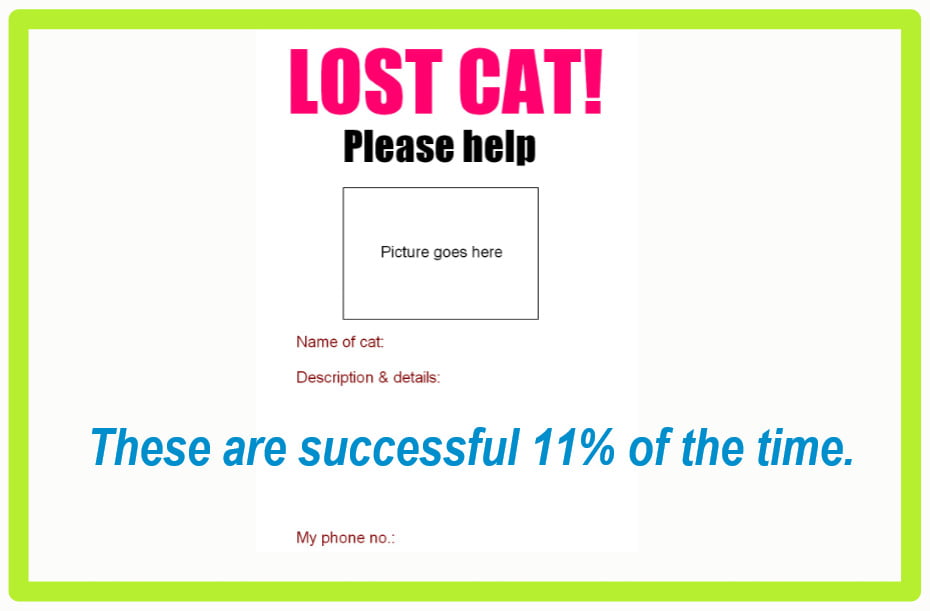 Most lost cats, 66%, which were recovered returned home on their own – this is surely very encouraging. Either that or they were found in the neighbourhood (7%).

People usually post signs in the neighbourhood and 11% of cats were recovered through this method. I believe that it is undoubtedly true that most lost cats are within quite a short distance of their home. I don’t think you need to go very far afield to find your lost cat; perhaps within a half mile radius.

In addition, cat owners call or visit an animal agency and this method had a 7% success rate.

The survey concerned 138 lost cats. Of these just over half, 53%, were recovered. The average time to recover a lost cat was five days. Comment: the success rate is disturbingly low.

There are numerous articles on this website with happy endings. The endings are happy because a lost cat has been found because that cat was microchipped. I am sure that micro-chipping is a very important method of reuniting lost cat with distraught cat owner.

Often lost cats are found by somebody else and taken to a rescue centre or perhaps, occasionally, a veterinarian. They can be scanned for a microchip and then the owner contacted provided, of course, the microchip is up-to-date.

However, another study in 2010 (Lord) found that only 63.5% of owners of microchipped stray cats entering an animal shelter were traced. There appear to have been issues relating to registration which undermined the efficiency of the micro-chipping process. Sometimes when a person finds a lost cat they claim him/her and won’t return the cat to his owner even after the owner has been identified through the microchip.

The study found that collars may come off frequently and become lost. It is important to check a cat’s collar to make sure that it fits properly and does not need adjustment. The study found that out of 538 cats, 18 of them caught a forelimb in their collar or caught their collar on an object or in their mouth. Some of these mishaps were due to ill fitting collars. It would seem that cats accept collars more readily than cat owners believe they will as 70% of cats in the study accepted their collars for the entire six month study period.

P.S. I remember one cat owner using her scent to attract her cat. I think she left some of her clothes at various places, relying on her cats super sense of smell to lure him in.

The studies were all by Lord et al as referred to in The Domestic Cat: The Biology of its Behavior.