NEWS AND COMMENT: This is a good law. It is a law that was required in Manatee County and which arguably is required anywhere. Community cats or cats without a home but which are cared for by volunteers can, in some people’s eyes, be regarded as pests. And the law sometimes regards them as pests. Pests and vermin. My understanding of this story is that was the way Manatee County regarded cared-for but unowned cats in their county. Things have changed. I’ll explain what I mean.

Melody Carpenter is clearly a cat lover. She lives in Manatee County, Florida, USA. It has a population of 322,833 citizens. Carpenter was taking care of a couple of cats in a house down the road from hers. She had been doing this for about 18 months. She was operating a TNR program on them. This meant that they’d been trapped, neutered and returned. They had received their rabies vaccinations. All was well until about a year ago when one of those cats, who she had named Lucee, went missing. She takes up the story:

“One of the neighbors decided she didn’t want one of the cats in her yard. So, she took it upon herself to have a professional trapper and removed.”

Comment: it seems, to me, that this house was unoccupied but owned by an individual who lived nearby. That’s my understanding.

She never saw Lucee again. Clearly, the cat had been trapped and killed. We do not know whether the killing was humane or not. I suspect it was carried out inhumanely because the person who did the trapping would have been a pest controller and they don’t much care about dealing with animals humanely.

Carpenter was devastated. She talked to law enforcement who told her that under the law of Manatee County the person who instructed the pest controller to trap the cats was acting legally. Anybody can do it, they said. In other words, if a cat comes into your yard and you don’t want them there you can call a pest controller and have it removed. They can be euthanised, which is a euphemism for being killed. Or the cat can be relocated. In short, they can do what they like with the animal.

Carpenter has a good brain because she realised that you can’t do that kind of thing with other animals. She said: “If a bat, various birds, deer or bobcat, gets on your property, you are not allowed to trap those”, but you can do it with a cat. Something was wrong she thought and she wanted to get the law changed.

Over the next 12 months she lobbied and was in contact with local and state lawmakers. She worked with Manatee County Animal Services. Her work has paid off. She has got her new ordinance.

Sarah Brown, the Division Chief with Manatee County Animal Services, said that they have made some changes to the ordinances in the county. She said that if you trap a cat, it can only take place for the purpose of trap-neuter-return i.e. under a TNR program of some sort. Animal services will take care of the rabies vaccine and ear tipping and sterilise the cat. “Ear tipping”, as you probably know, tells residents that a cat has been through the TNR program.

Sarah Brown believes that the only way to reduce stray and feral cat populations is through sterilisation. She is correct and it is a humane way of achieving that objective.

Further, Brown said that her organisation is going to “educate pest control companies and trappers to make sure we are keeping cats in our community safe and to make sure everyone is in compliance of our ordnance”.

They have named the new ordinance after the cat who was killed: Lucee. It is now an acronym for ‘Let’s Unite Cats Everywhere Endlessly’. They had to construct that rather carefully I would say.

Carpenter of course is delighted. She now believes that the animals have a voice and “we are their voice”. The penalty for being in violation of the new ordinance is a minimum $500 fine.

Comment: the big question after reading the story is how many American counties have such a law? Should such a law be universal in America? I think it should because it is sensible. If you allow anyone to trap and kill a cat either in a public place or in your backyard without due notice and consideration you are exposing yourself to criminality. You might be trapping someone’s pet. You kill that animal and you are committing criminal damage. And it goes without saying that the act of trapping and killing an animal wantonly without care and consideration is immoral and inhumane. It is cruel. It is thoughtless and a cheap and uncivilised fix. 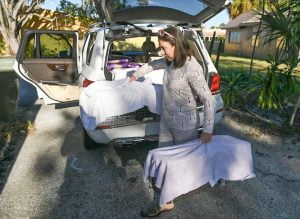 Tips on trapping cats by a ‘cat trapper extraordinaire’

I have to write about Daria Weber because she is the kind of person that I admire more than any ...
Read More 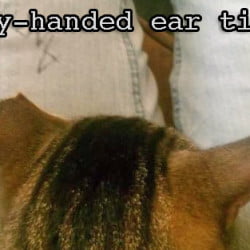 Ear tipping is aesthetically unacceptable to some people. So what! - I hear you say. Ear tipping makes a cat ...
Read More

Despite the fact that the number of domestic cats and dogs in America has doubled since the 1970s, the number ...
Read More

I'm looking at two sets of data in this article. The first one that I refer to comes from the ...
Read More

What is the best and least stressful way to take a feral cat to the vet?

I think this is a very good question. What if you see an injured feral cat and you want to ...
Read More 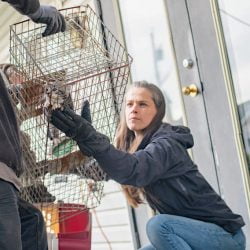 This is a good study which supports the benefits of TNR in a community. It took place in Florida and ...
Read More 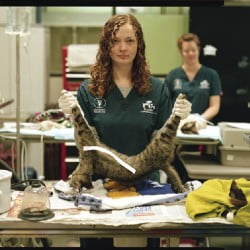