The origami tiger is a popular piece of origami for the simply reason, I suspect, that the tiger is the world's favorite animal. I suppose an origami cat doesn't quite do it but if you think it does (with perhaps a few modifications) then I have a post on that subject on this page: How to Make an Origami Cat. YouTube videos are the best source for instructions on how to make an origami tiger. But there is no single video, as far as I can see, that shows the process. Update to 2014 Dec:

There is a nice video about the creation and building of a very successful shoe business which features two origami tigers. 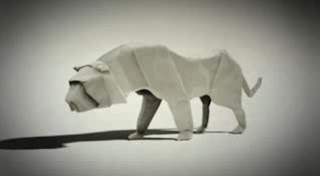 Origami tiger from the video about ASICS
The tiger in this video is one of the best I have seen but the video is not about making it! It does give a nice target, however. The next paper tiger that I liked on YouTube was this one: 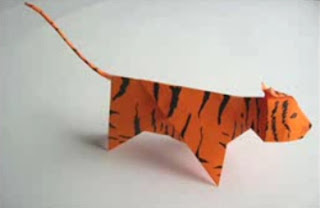 Still from a video

The trouble is the video doesn't show how but this page shows in still images how to make this particular tiger: Origami Tiger. The tiger is made from two pieces of orange origami paper. Origami paper is slightly lighter than ordinary copy paper and is often colored on one side and white on the other. It can also be bought in dual color and patterned.

The word, "origami" (折り紙 ) comes from oru meaning folding, and kami meaning paper. Here are two more different origami tigers. The first is a tiger face and the second is, I believe a saber toothed tiger. A saber tooth tiger is not strictly a tiger as we know it, however. They are both published here under Wikimedia® creative commons license license = Attribution-ShareAlike License. Both were uploaded into Wikimedia by the User:Archivaldo. 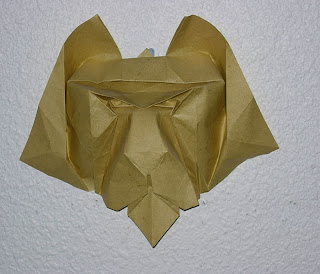 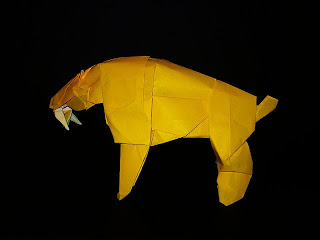 Personally, if I was making an origami tiger I would go to the video on How to Make an Origami Cat and then modify it to turn it into a tiger. After all a tiger is a cat, just a bit more muscular.