↓
Home→Uncategorized→Should we “own” a cat?

This page attempts to introduce the subject. I was prompted to write it after reading the Cat Fanciers’ Association’s argument that ownership of cats is good.

Of course they would support ownership of cats because their members sell cats. A contract for the sale of a cat is safer if the seller owns the cat. That seems obvious. 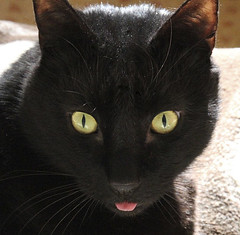 You won’t own me!
I found the CFA’s arguments rambling and contradictory, to be honest. But at its core there is the simple statement that “…As legal property, they cannot be taken away from us except by Constitutional due process..”

The CFA says that an alternative word “guardian”. “contradicts this critical protective and personal relationship..”

It appears from these statements that the reason why cat breeders want to retain the idea of cat ownership is because it provides a defense to someone taking the cat away from the owner. But how often does this happen? Hardly ever. It only happens in rare convictions for animal cruelty or cat hoarding. Am I wrong?

That is partly why I don’t think this is actually the real reason. The real reason is as mentioned; cat breeders have to treat cats in some respects as a product to be sold like any other commercially produced product. To change the relationship between cat and human in such a fundamental way by introducing the principle of “guardianship” would undermine the cat breeding business. I can understand and respect that. It would have been better if the CFA had simply said that.

There are alternatives to the principles of ownership and guardianship.

Linda P Case in her excellent book: The Cat: Its Behavior, Nutrition and Health

, uses the phrase, “caretaker”. This is my preferred language because it reflects the true relationship. This is where the CFA come unstuck. They say that a cat is a family member and it is best to “own” a family member. This can’t be correct.

I would think that all right minded people would agree that “caretaker” or “guardian” is the correct language and describes the true relationship.

But there cannot be a change to the language of cat keeping until the law is changed to remove the cat companion as an object to be owned. This is highly unlikely at present because there might be consequences and complications with respect to contract.

That said a person does not have to own an object to be able to sell it. Agents acting for principles can sell objects on behalf of the principle. And people with a power of attorney can also sell objects owned by others.

I would have thought that it would take little in the way of legal adjustment to allow breeders to sell cats despite not owning cats.

You see, for the vast majority of people the idea of cat caretaking is preferable. We should not hang on to the outmoded and outdated concept of cat ownership for a tiny minority of cat keepers – the cat breeders.

Cat breeders have a right to be protected. But a change in the law under which a companion animal has similar rights to other family members would substantially help the cat and if drafted properly the rights of cat breeders would be protected.

It would remove the idea that people can do as the please with the cat. This has resulted in overbreeding (selective cat breeding) of some cat breeds (e.g. Persian and Siamese) and it promotes abandonment of cats and declawing, I argue. The long term benefits for cats and equally important society (think feral cat problem) far outweigh the fiddly process of adjusting the law.

It conclusion a change in the law would help to create a new and improved mind set more in tune with modern life, respect for other animals and the preservation of the planet generally.