Note: this page has been updated as at Sept 15th, 2022 and republished (see update below). Are there mountain lions in Texas? Well, yes but what with continual human population growth, increased human activity (including road building), the horrible practice of sport hunting and decreased mountain lion habitat, I am sometimes surprised. That said, the geographic range of the puma (another name for this cat) is the largest of any terrestrial mammal in the Western Hemisphere, although it is shrinking.

Here is a screenshot of a video of a close mountain lion sighting in Big Bend National Park Texas in April 2022 – click it for a larger image. The cat was stalking a deer in the bushes.

The Texas mountain lion is the same as other pumas except there are large variations on the weight of these cats, which is a reflection on the wide range, spanning as it does two continents, north and south America. In general terms, pumas at the latitudinal extremes of the range, the tip of southern Chile to the top of the Canadian range are likely to weigh roughly twice those that live in the hot tropics. The climate in Texas is variable so this doesn’t help to assess the relative size of the Texas mountain lion. However, in Colorado to the northwest of Texas, mountain lions have been found to weigh about 67 kg for males and 44 kg for females. 45 kg is about 100 lbs. You can see why they can be chased off rather than shot with the proper tactics. 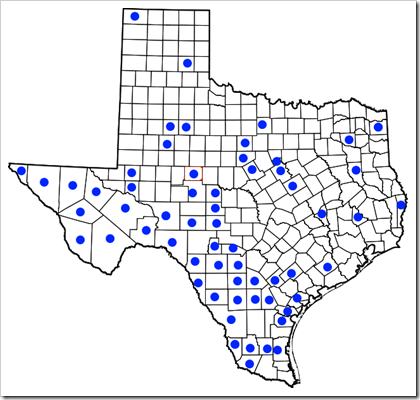 The blue spots in the map above mark the counties in Texas where mountain lion mortalities occurred over the period 1983 to 2005 (source: map based on one made by the Texas Parks and Wildlife Department). Mountain lion mortalities are a good way of knowing where this animal’s habitat is. The above map is a modified version of one made by David Benbennick which he released into the public domain under the Wikimedia Commons. It makes for a very nice comparison with a map that shows human population of Texas as at 2000, which is below: 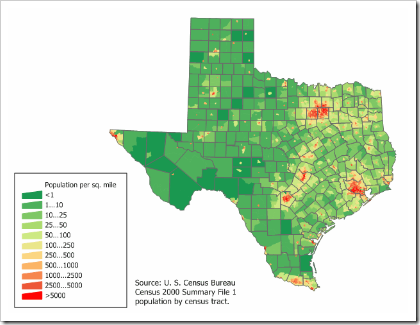 The map above shows clearly how the presence of people push out the Texas Mountain lion. It shows the eastern counties as much more heavily populated with people than those in the west. It is almost as if the state is divided up between the two species with no overlaps: a recognition of the impossibility of living in harmony together. The same arrangement of course exists in relation to north America generally. The above map is published under a Wikipedia License (new window).

This is a good opportunity to show the entire mountain lion distribution, which is illustrated on the map below. This is as at 2014 and is the most current map at 2022. The Red List is consistently behind the curve.

Puma distribution 2022. Click it for larger version. The information for this map is 2014. It comes from the IUCN Red List.

Update: September 15, 2022: TEXAS PARKS AND WILDLIFE tells us that in their state, the mountain lion is found throughout the Trans-Pecos, as well as the brushlands of south Texas and portions of the Hill Country. This department maintains records and request information from their citizens on mountain lion sightings and mortalities. They want to find out the distribution of pumas throughout the state. They request that people contact them if they’ve seen a mountain lion or killed one recently.

You can call a toll-free number on 800 792-1112. Mountain lions have attacked people on four occasions in Texas since 1980. All of the attacks took place in remote areas in West Texas.

Between 1890-2001 there been a total of 98 attacks by pumas on people across the entirety of the US and Canada of which 17 were fatal. Puma attacks are much rarer than attacks by dogs and other animals. Dogs kill 18-20 people annually in the US. Their advice on encountering a mountain lion is to:

I will add my comment: there is no need to shoot mountain lions less under very rare particularly dire circumstances. They can be rebuffed.

Below is a map of the counties where Texas mountain lion mortalities have occurred between 1983-2005.

How many mountain lions are there in Texas in 2022? The answer is that the experts don’t know. They are not counting. They say that Texas is big enough to support over 6,000 mountain lions, but the population will be much lower than this due to overhunting and human encroachment on their habitat. This means a destruction of their habitat.

The video below shows the hikers’ encounter.

Note: This is an embedded video from another website. Sometimes they are deleted at source or the video is turned into a link which would stop it working here. I have no control over this.

As West Texas is known for vast open spaces and a sparse human population, there may be more mountain lions in that area of Texas than in others. And some mobilise may move across the Texas-Mexico border quite frequently.

Below are some more articles on the puma.

Puma cat – all aspects with links to more