Just a quick note about the Thames flooding. Here are a couple of snapshots taken yesterday evening of the Thames about a 15 minutes walk from where I live. They were taken with an iPhone. I live in Ham which is near Richmond Park. The Thames always looks awesome and beautiful but it can cause a lot of distress and chaos. Billions of gallons of water race by at 15 mph only feet from you. 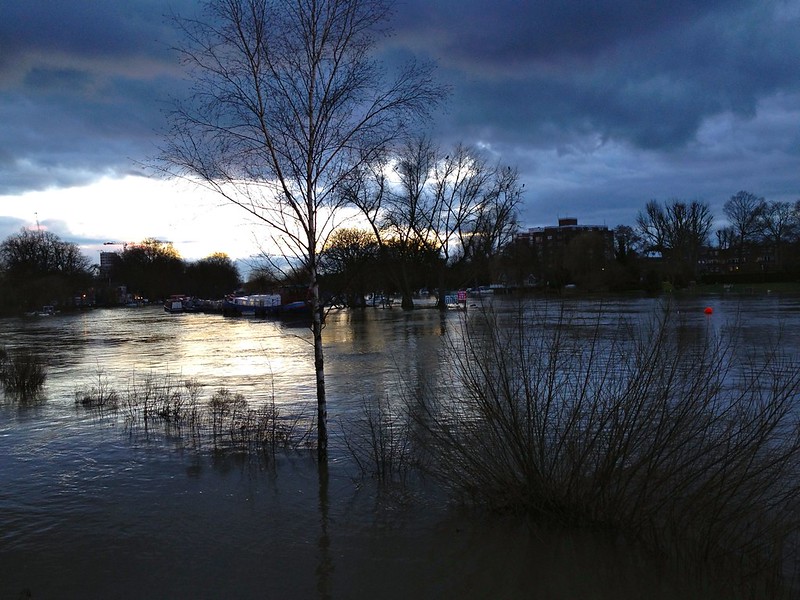 The water nearest the camera, this side of the tree covers a road. 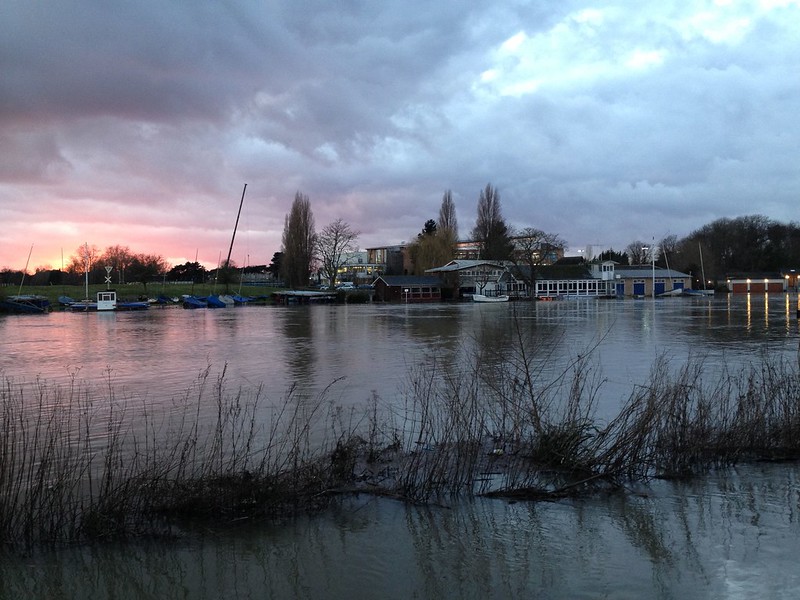 The water this side of the weeds covers a road that runs alongside the river. Behind me are houses.

Hundreds of homes are being evacuated along the Thames in places like Purley, Staines, Wraysbury and Shepperton. The Thames has burst its banks west of London, which is upstream. There have been countless government warnings urging people get out because there is a threat to life. People are seeing their homes severely damaged. Their homes will possibly become uninsurable (or they’ll pay much increased premiums) and unsaleable if this really is an example of global climate change which is what a senior employee of the Meteorological Office has stated that it might well be. People who just bought their home, having finally got onto the property ladder are seeing their dreams shattered under tons of water and mud or worse, raw sewage.

Many people are leaving their home with their cats and dogs but many others are staying because of looting. This is not very British, you might think. You’ll have to think otherwise I am afraid. People just move upstairs and get around on boats and tractors with trailers. In typical British stiff upper lip style they carry on as normal (well, not really) and treat the road as a river, and substitute the car for a boat.

The truth is that if this is permanent climate change it will change the way of life for hundreds of thousands of people in Britain who live on low lying land including flood plains. The Somerset Levels in the West Country have been flooded since Christmas. These are flood plains as I see it. One has to ask, should people be living there? Thus far the answer is yes but now it may be the case that people will gradually migrate from these once attractive places to higher ground.

Properties along the Thames are extremely desirable. Often they are large detached houses worth many millions of pounds. They are actually on the banks of the river, within a few paces of it. Beautiful but now it is bad. Some of these majestic mansions are flooded. Their value slashed, I suspect.

How is this relevant to cats? Well it is because when a family evacuates a home they take their cat or dog. A cat may need rescuing having hidden somewhere or is trapped. There may be loss of life. Fortunately cats are good natural swimmers when forced to do it.

People understand what is going on and that probably makes it easier to accept and adjust although it is a nightmare. However, for the domestic cat who has to live in a strange place with a mass of disruption, noise, confinement and uncertainty it is the sort environment that can cause ill-health through stress and other hazards. The cat is more vulnerable I feel under these extreme circumstances particularly as their “owners” are extremely stressed themselves. Perhaps many cat caretakers will place their cat in boarding catteries. They may stay for a long time. For many cats living along the mighty Thames, this is a frightening time.