This must be the worst case of animosity between neighbours when one of them feeds cats outside and the other dislikes it. This happens quite a lot in America as far as I can tell. There is nothing like feeding stray cats for creating neighbour disputes and anger. It is something which polarises communities and which has called a lot of arguments and even changes in the law. To some people feeding stray cats is a humane thing to do. For others it is a nuisance and they say it attracts unwanted wildlife and other cats to the area because they feed on the cat food.

On this occasion the 70-year-old man became agitated to the point where he pulled his gun out of a holster and shot through the front door of his neighbour’s house. The video shows it. They’re speaking in Spanish.

They live in Miami. He fired four shots. He has been arrested on an attempted murder charge. It’s quite amazing that the people being fired at recorded the incident on their cell phone. They obviously had the presence of mind to record it despite the danger that they were in. This allows them to present hard evidence to the police which in turn should get rid of this man for a while. 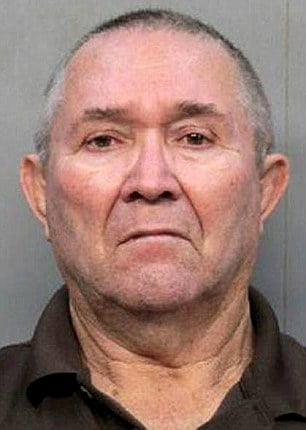 José Estrada shot at his neighbours for feeding cats.

“We were scared because he took shots at my head. He wanted to kill me. He was waiting for us to go inside the apartment. We called police on him twice before. We have recordings of him throwing away the cat food and the cat food cost money.

The arrested man is being held on a $10,000 bond and is in a Miami jail. No one was injured but there appears to be an attempt to injure.