Yes, the title means what it says. When local people living in the Andes were asked how they had obtained the skins of the rare Andean cat, they answered, “We drop rocks on them”. This seems to have been said in complete innocence and with an almost shocking naivety. As you might image the Andean mountain cat is a very friendly and trusting wild cat in allowing people to come near enough to have rocks dropped on them. How ironic is that!

Unsurprisingly, the Andean cat is scarce in the area. They had asked earlier that if someone saw one could they please be notified! The culture of the local people regarding this cat is behind this behavior. I am giving my thoughts on an article in the Feline Conservation Federation magazine of March/April 2009 by Jim Sanderson PhD, perhaps the foremost authority in the Andean cat. 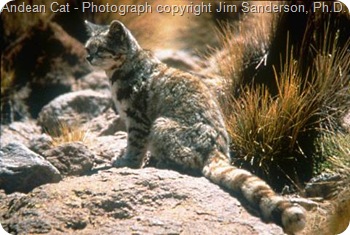 People of one country should be naturally respectful of other peoples’ cultures. We should therefore be cautious when discussing them to avoid insulting the people. What do we know and what right do we have to criticize another peoples’ culture? It can be argued that anyone can criticise any culture as they all have aspects that are open to scrutiny.

Agreed, yes, but in the instance of the Andean cat and other wild cats I believe that anyone has the right to make out an argument that protects the cat when its survival is jeopardised under these circumstances. There are two overriding reasons for this:

When the concept of wearing skins or eating wild cat body parts or using dead wild cats in this way was formulated the world had an abundance of wild cats and there was little science to refute the ideas and prevent the ideas germinating. Killing the cat to take something from it was a selfish act and one that was not in harmony with nature. It is very similar to the killing of tigers for their body parts in Chinese medicine. Times have moved on but superstitions die hard.

But fortunately people like Jim Sanderson PhD and his colleagues are tackling these very deep rooted issues through education. In 1999 people involved in wildcat conservation formed the Andean Cat Conservation Committee. This became the Alianza Gato Andino (AGA – could this be translated as the Andean Cat Alliance?).

AGA has created a two pronged attack on the problem:

Obviously nothing can be achieved without the cooperation of the people who matter, the people who share the land with the cat. One day, hopefully soon, the people will say, we used to drop rocks on the Andean Mountain cat. But the story does not end there. As I said this cat belongs to the world and the world has to do its bit to reduce global warming which is causing the shrinking of the glaciers of the area that feed the streams and rivers that in turn indirectly feed the Andean mountain cat.

This brings to mind the efforts of the the Snow Leopard Trust’s livestock vaccination program, which is successful.