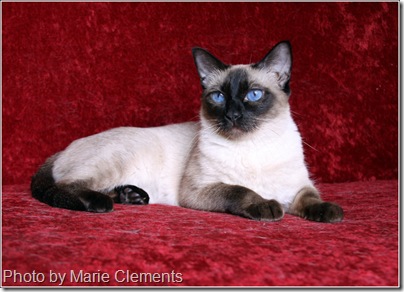 Marie Clements of Siamese Royalty has very kindly agreed to provide me with words and images on the Traditional Siamese cat – the true Siamese cat as far as I am concerned (see Siamese cat history). I am very grateful. This cat is much more popular than the Modern Siamese judging by this website’s long standing poll.

Marie takes a good photograph and she breeds fine Applehead Siamese cats so this makes good reading. What follows is in her own words and images…

The History of the Siamese Cat

…The history of the Siamese cat, originating from Siam now known as Thailand, that we grew up with, was a stocky round-headed cat. They have remained stocky in appearance to this day in their homeland in my many parts of the world, including United States. The profile of the Applehead Siamese is a more stocky, big-boned and heavier build of the three types of Siamese cat (Traditional, Classic and Modern Wedge Siamese).

It is also larger in bone structure. The given term, “Applehead” is due to its head that resembles the shape of an apple, very round. The Applehead Siamese’s nose profile has an obvious dip that can be seen when the head is turned on its side. The word “dip” is what breeders are referring to when describing a break in the nose. Its nose is also shorter when viewed side on. Additionally, the Applehead typically has shorter and smaller ears.

Note: All the photos except the last two are linked to larger versions – please click on the photo to see larger images 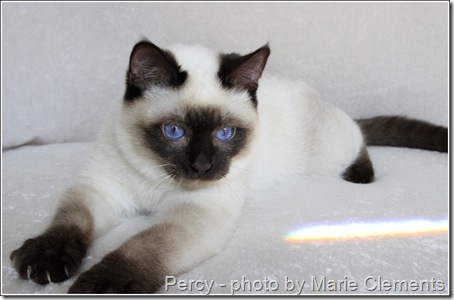 It also has a slightly more elongated body, legs and tail. Their ears are larger and higher situated on the head than the Applehead. Its nose is longer, making the nozzle appear longer, when viewed side on.

The Classic Siamese nose profile has as almost no dip that can be seen when the head is turn on its side. They are still part of the Applehead Siamese cats that Originated from Siam. These cats have been known to live well into their teens. 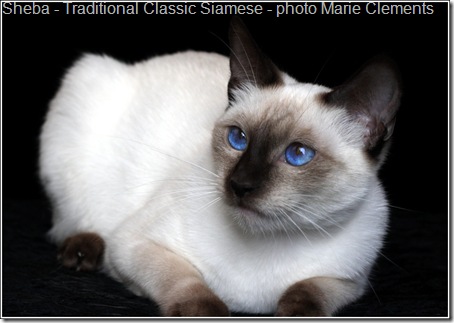 There are four colours:

Note: The above photos are linked to larger versions – please click on the photo to see larger images. They are all copyright Marie Clements.

The development of the Lynx Point pattern was more of an accidental breeding between the household striped Tabby and a Purebred Siamese. As time progressed and the early hybrids gained popularity, the tabby versions of the Siamese were introduced into the Colorpoint Shorthair programs in the four Siamese color varieties.

Applehead Lynx-Point Siamese cats are well known for their longevity and good health and can live anywhere from 15 to 25 years, sometimes even longer.

They are resilient, sturdy cats with a hardier Immune system than their wedge counterparts, which typically live between only 5 to 10 years. Interestingly, the Lynx-Point Siamese possesses both the less territorial nature of the long haired Siamese (Balinese), and the more active playful nature of the short haired Siamese. They are full of hilarious antics that keep you laughing. They like to be noticed and demand your Attention.

Like a dog, they come when you call their name and even possess the ability to Recognize many words. Females are said to be very motherly and are affectionate towards Children. They want to go everywhere you go and do everything you do. Together with the aforementioned characteristics comes a strong sense of curiosity. While this may be an endearing trait to many an onlooker it is often the cause of much owner-frustration. Many owners can unfortunately relate to the old saying that “curiosity kills the cat”. Hence, while one may enjoy the tremendous privilege of owning and enjoying such a treasure it is important to Be mindful of the dangers such curious cats might encounter.

They are busy bodies with a sense of curiosity that can drive one nuts sometimes. Nevertheless I adore my Siamese cats. Overall, the Traditional Colorpoint Lynx Siamese is a highly intelligent, inquisitive, playful and is a people-orientated (people cats) breed. They are extremely affectionate, outgoing and enjoy lounging around and playing with people. 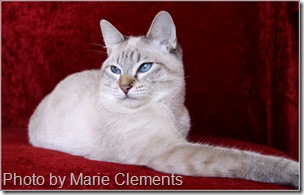 The wedge Siamese is far more elongated and more extreme in body type than the Traditional. The name “wedge” derives from the wedge-shaped head, like a triangle, very sharp and pointed. The wedge Siamese head is delineated by an absolutely straight profile and aligned chin. From the tip of its nose and through to the corner extending to the two accented large ears that complete the wedge like shaped head. 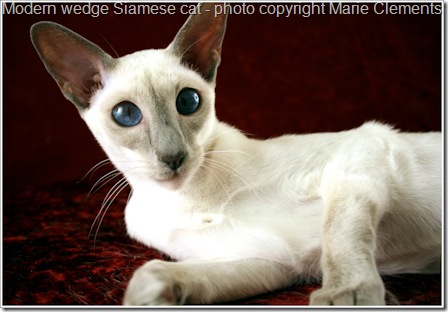 The eyes are a more slanted, almond-like shape and set one eye width between the eyes. The rest of the body is longer, thinner, tubular and svelte looking. The wedge Siamese nose profile has no dip that can be seen when the head is turn on its side. Its nose is also a lot wider than the above the Traditional Siamese. Like the wedge Siamese, the Thai (old-style) Siamese is now shown at TICA and CFF Cat Shows. 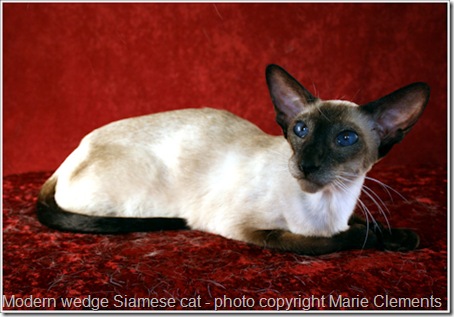 All the photos are copyright Marie Clements. Thank you Marie for telling us about the Applehead Siamese cat.

P.S. This page has been republished. It was first published on the site over 6 years ago. It deserves to be taken out of the archives.