I say that the domestication of the cat causes cat hairballs. This statement is provocative, yes, but probably or at least possibly true. It would certainly be true of the long haired cats that have hair that is unnaturally long such as the extreme Persian or Ultra Persian.

What I mean is this. Nature wouldn’t allow the cat that has evolved over millions of years to suffer cat hairballs that cause problems. Cats in the wild probably get hairballs but they are passed through the gut normally. The natural course of events is that cats lick themselves (including the big, medium and small wild cats) to keep clean and more ( cat licking behaviour). Licking themselves is a natural event for all cats so it would very surprising if evolution created the situation whereby a natural and positive event (licking) caused ill health and possible death. The evolutionally process wouldn’t have happened if it was dangerous to the cat. 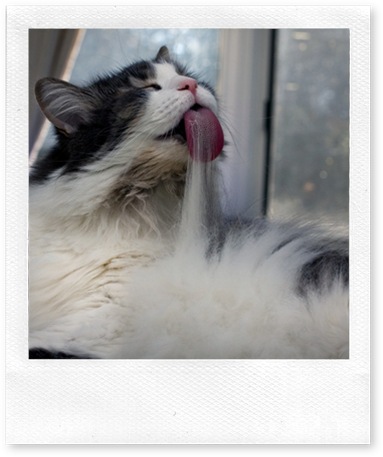 The making of a cat hairball (only kidding – nice photo and nice cat). Photo by eric_malette (new window) and published under an Attribution-Non-Commercial 2.0 Generic

Domestication of the cat is essentially an unnatural state of affairs. Breeding has resulted in longer hair in long haired cats and it could be argued that the more passive lifestyle of domestic cats, particularly full-time indoor cats causes bowl movements that exacerbate the problem. 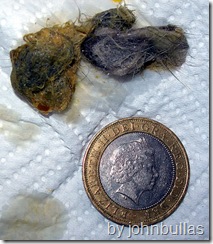 Cat hairballs are tubular brownish wads. Other material that has been swallowed can bind with the hair to form a bezoar. If it becomes too large it cannot pass out of the stomach and through the gut. The results is sessions of vomiting (that might contain hair) and symptoms that are similar to chronic gastritis including wheezing type cough. Hair caught in the colon can cause constipation.

People searching for remedies for cat hairballs are taking reactive steps, which is understandable because it may be the first time it has happened to the cat. Once the problem has been dealt with (see below) the best action is preventative steps. And there is only one, really, and that is grooming. And the best grooming tool is probably the famous Furminator.  I am not promoting it but it is all over the internet! 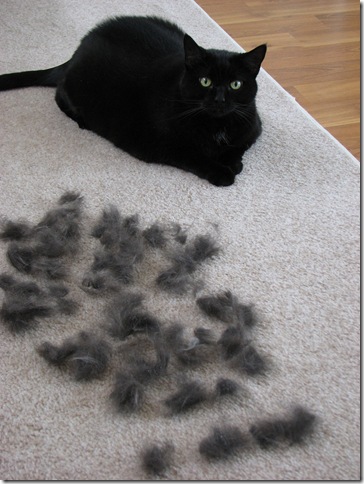 Removed with a Furminator. I wish I made the device! Photo by Emily Lewis

Here is the device: 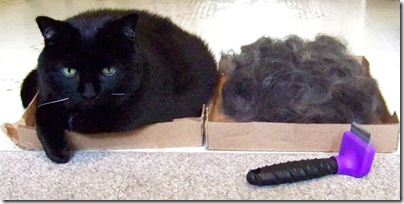 Yes, it’s real! The person (and photographer: Maia C) who lives with this happy cat says this:

“I bought a FURminator "de-shedding tool" today. The box on the right contains the results of a 20-minute combing session. The best thing is that Lightfoot tolerated being combed for 20 minutes. Her usual tolerance is somewhere between two minutes and zero. “ 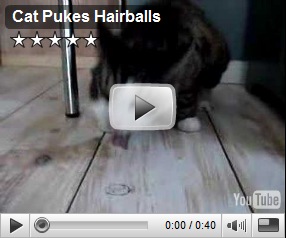 Mineral oil can be used on people (src: Wikipedia published under license):

Mineral oil is taken orally as a lubricative laxative, and is often prescribed to ease the pain of bowel movements for those who suffer from hemorrhoids and con stipation…

Psyllium is mainly used as a dietary fiber, which is not absorbed by the small intestine..

…Mucilage is edible, but tastes rather bland. It is used in medicine for its demulcent properties…..a demulcent (derived from the Latin demulcere, "caress") is an agent that forms a soothing film over a mucous membrane, relieving minor pain and inflammation of the membrane. 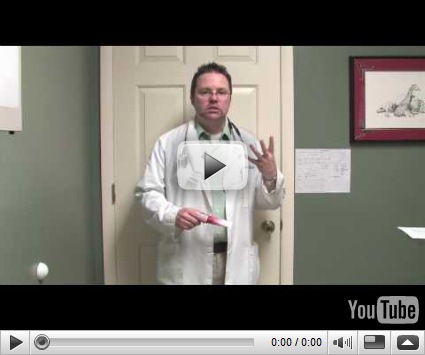 Cat hairballs Photo: published under a Attribution-NonCommercial-NoDerivs creative commons License  — this site is for charitable purposes in funding cat rescue and by johnbullas