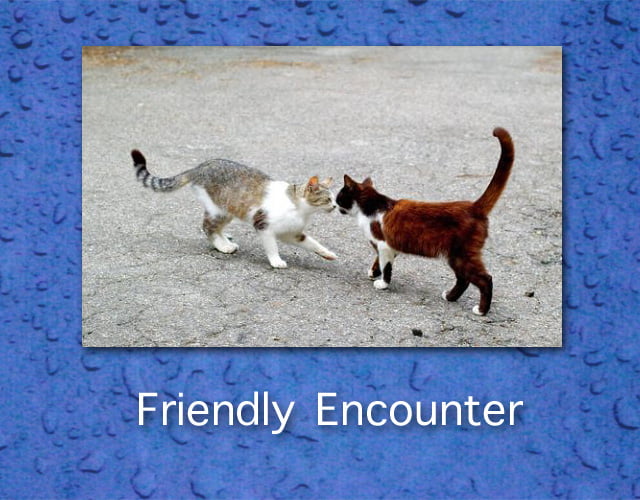 The cat tail up position in relation to a cat meeting another cat is a communication signal – a piece of body language – which says: “I am friendly and I accept my social status”. So, it is more likely to be initiated by a cat of lower status to a cat of higher status. The dominant cat can accept it, whereupon he will put his tail up. This then leads to more intimate, friendly behavior such as rubbing and nose sniffing. The reason? To keep the peace, be friendly, fit in with the hierarchy and reduce the possibility of antagonistic behavior such as fights in colonies of cats. Bottom line: there is a better chance of survival for all.

Lions employ tail up “during head-rubbing and sniffing contacts”.  Tail up is described as an “affiliative behaviour”.  In layperson’s language that means friendly behavior between cats in groups. For the lion, the tail is raised almost vertically but tipped limply towards the lion being greeting.

The tail up body language communication evolved because of colony living of the lion and domestic, stray and, I presume, feral cats.

How did it come about? It seems tail up evolved from three possible sources:

The fundamental reason for the evolution of the cat’s tail up position is because the domestic cat has adapted to living in groups or colonies and under these historically, unnatural circumstances the cat had to find a way to maintain harmony amongst cats who are essentially solitary creatures. The body language of tail up achieved that objective.

Source: A study was conducted on Italian cats in Rome. The study title is: The social function of tail up in the domestic cat (Felis silvestris catus) by S. Cafazzoa and E. Natolib